Tungnath is one of the highest Shiva temples in the world and is the highest of the five Panch Kedar temples located in the Rudraprayag district, in the Indian state of Uttarakhand. 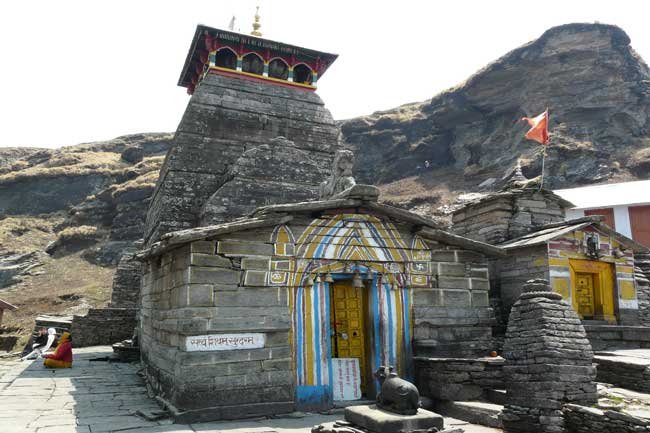 Tungnath
Tungnath is one of the highest Shiva temples in the world and is the highest of the five Panch Kedar temples located in the Rudraprayag district, in the Indian state of Uttarakhand. The Tungnath mountains form the Mandakini and Alaknanda river valleys. It is located at 3,470 m (11,385 ft), and just below the peak of Chandrashila. and is the second in the pecking order of the Panch Kedar. Its architecture and artistic structure, Tungnath Temple is considered to be more than 1000 years old. The temple is dedicated to Lord Shiva and a few other idols of Goddess Parvati. The temple was built by Pandavas after the epic Mahabharata war ended. From now on the priest of this temple is Brahmins from a local village. 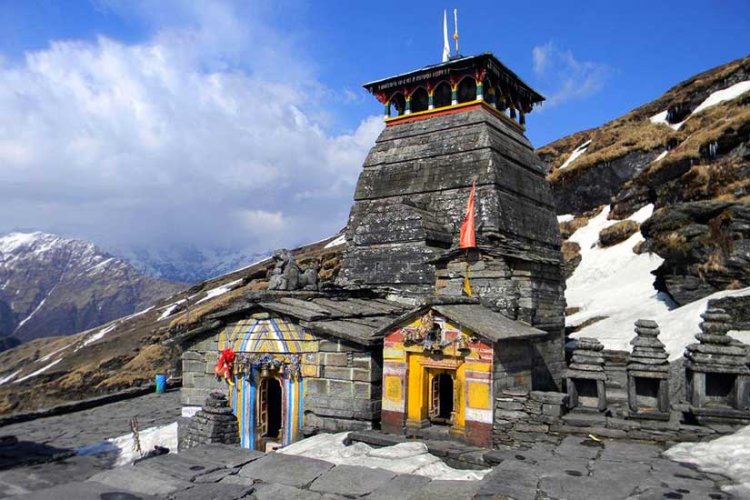 How to reach there :
if you consider yourself in Delhi then the first milestone to cross would be Haridwar. From there Tungnath is 200 kilometers away.

Or you can take another way which is :
Haridwar –  Rishikesh –  Devprayag –  Srinagar –  Rudraprayag –  Agastyamuni –  Kund/Sari –  Ukhimath –  Chopta – Tungnath.

Tungnath trekking :
From the Rhododendron forests on the route that gives a crimson glow to the rustic lands to the pure white snow that crumbles with your touch, it is one unforgettable experience. It is also an easy climb, and hence an ideal trekking spot along with family and friends.

Trekking Itinerary:
The first day of the Tungnath trek involves driving to the base point Sari. It takes less than half a day, and this is where convenient accommodation will be arranged for the night.

On the second day, the trek to the Deoria Tal can be started, and it takes just about 40-50 minutes to reach. Deoria Tal is the common camping site, not just for the adventurous trekkers but also for those who are looking for a peaceful get-away in Uttarakhand. By the lake, you can watch the undisturbed reflection of the Chaukhamba mountains from here. 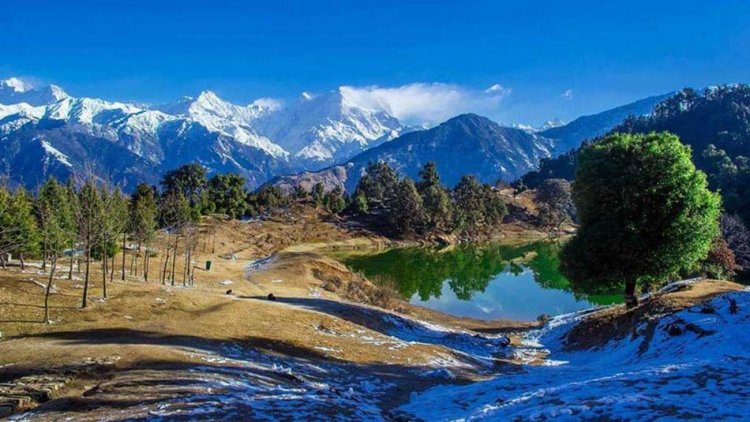 From here, reaching Chopta takes a longer duration due to the increasing steepness and altitude. Through the uneven terrains of the pine forests, it takes about 9-10 hours to reach the destination. By the end of the day, the idea itself of getting to see the snow-capped peak becomes true. The trekkers keep counting the hours and hoping the day starts sooner so that they could pick up their rucksack and trek to the spectacle. 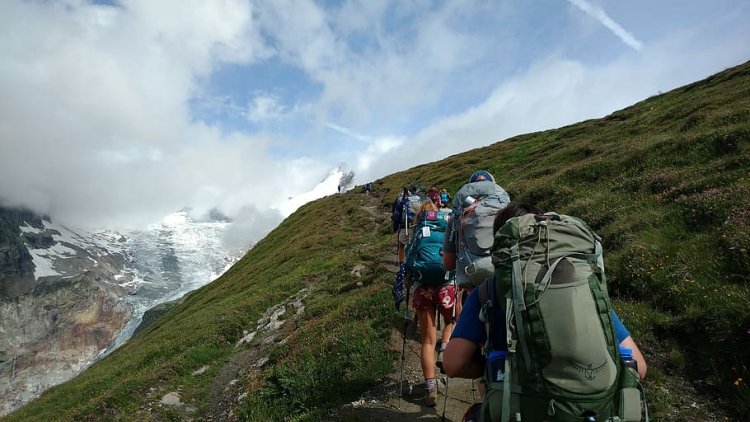 The fourth day marks a 5 to 6-hour trek to the moderately easy gradient of ascent. The time duration is the common span for regular trekkers, it can vary for a beginner. At an elevation of 12000 feet, this is one of the most important flag points in Uttarakhand. And, trekking in Uttarakhand is incomplete without covering all

Tungnath witnesses a good share of a crowd including tourists and localities because of the Tungnath temple. The highest Shiva temple in the world, this humble abode of worship is an exceptional meditational spot. Radiating with an energy like no other, it’s not the usual feel of sitting cross-legged on a lush meadow. Instead, it’s the chilling breeze, that often gets harsh but still carries a sense of serenity within it. Just sitting here on the rocks in the silence of the snowy mountains, is refreshing.

One of the other reasons that make this peak even more special is the view from up there. Unlike the usual 360° view of the valley in the form of minuscule specks, you could see all the major mountain peaks of Western and Eastern Uttarakhand like they’re up close

Best time to visit Tungnath:
Each season shows an entirely different shade of Tungnath, so it’s mostly up to you regarding when you’d love to trek up to the summit. I’d highly suggest a visit during the months of summer when the temperature goes up to a solid 16 degrees. Not too cold and not too warm. In May the main deity here, Lord Tungnath is taken from Mukumath to the temple, and it’s a tradition that still lives up to its glory. Since one of the main attractions here is the Tungnath temple, this point of the month becomes even more favorable. This is also the time when it’s easier than usual to trek up to Chandrashila. 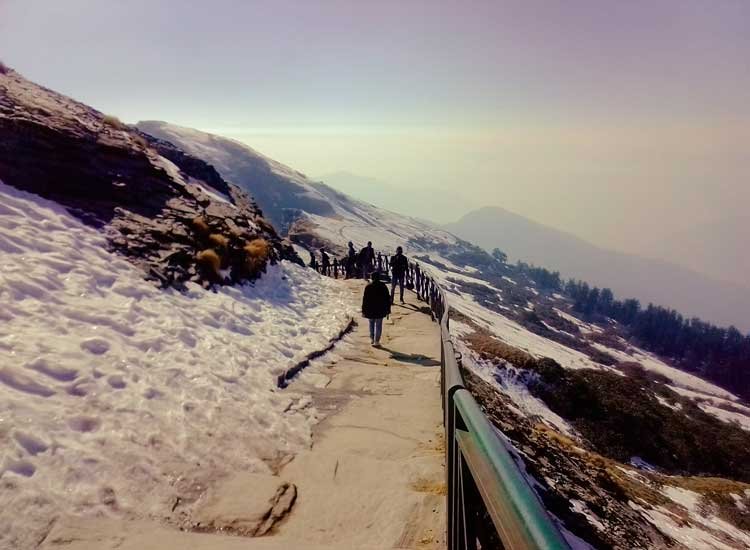 For the risk-takers, monsoons are a challenging trek. The trekking instructor who had assisted the group included those who kept narrating about how it’s the most dangerous yet the most rewarding deed to trek during a good downpour. Trekking during winters is a surreal experience with the fresh snow paving your way to the top.

Things not to miss during the trek:

Part of the Kedarnath Wildlife Sanctuary, the trek up to Tunganath would be a paradise to nature lovers. Tungnath is the perfect spot for spectating high-altitude Himalayan birds. These exotic species are hard to spot around, and quite a catch once you’re able to identify them. From the Koklass pheasants to the Himalayan monal and Nesting pied thrush. He named it all and told us interesting facts about each. Yet another interesting bird we encountered en route was the Snow Patridge, which is usually only spotted during winters. 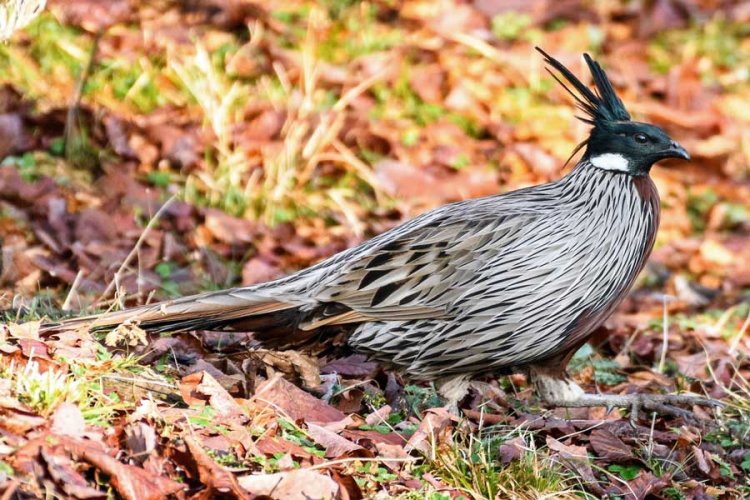 The highest shrine of Lord Shiva is undoubtedly one of the main reasons why a lot of them visit the peak. Perched on the ridges of Chandranath Parvat, the temple divides the two glistening streams of Alaknanda and Mandakini. At a height of above 12073 feet from sea level, this temple is third in a row of the Panch Kedar (five Kedar) – Kedarnath, Rudranath, Tungnath, Madhyamaheshwar, Kalpeshwar. It dates back to more than 1000 years and has several historical and mythological references to it.

Important things to keep in mind before trek:
1) There aren’t many halts en route to Tungnath, so make sure you have all essentials packed with you.
2) Avoid trekking at night. Even though it’s a safe route, there are chances of taking the wrong direction within the forests.
3) Carry plenty of water along and make sure you remain hydrated while ascending.
4) Do not carry heavy snacks for the trek as you might feel sick as the altitude increases. Carry light food such as biscuits, nuts, nutritional bars, or glucose.
5) Do not compromise on proper trekking gear.
6) Wear warm and light clothes and carry a raincoat just in case there’s unexpected rainfall.
7) Waterproof shoes are the best for trekking up the snow sieved mountains.
8) If you’re going solo, make sure you have a first aid kit along with you. In groups, the trekking instructors usually have such essentials packed along with them. You could carry along a personal healthcare kit as well.
9) There aren’t many ATMs or charging points after Chopta. So keep a considerable amount of cash and a power bank in hand.
10) Photography is allowed around Tungnath, but not within the temple premises.