Adi Shankara was an intellectual giant, a genius of linguistics, and above all, a spiritual light and the pride of India. The level of wisdom and knowledge he showed at a very early age made him a shining light for humanity. 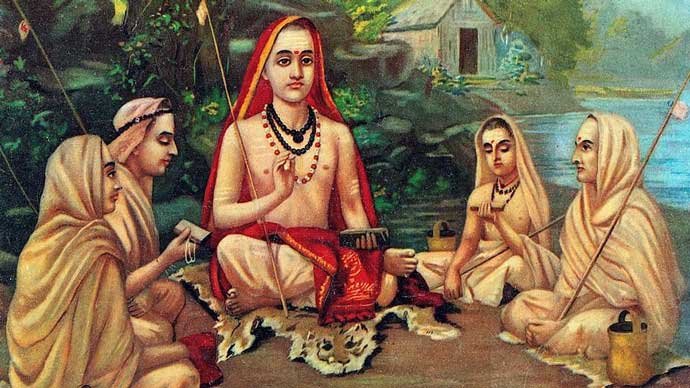 Once, while walking briskly with a bunch of his disciples trotting behind him, he came to a village. Outside the village, he saw a few people drinking, most likely the country homebrew liquor, which is arrack or toddy. In those days in India, and even up to about twenty-five, thirty years ago, drink shops were only ever outside the village. They were never brought into the village. Nowadays, alcohol is sold in the village, next to your house and in front of your child’s school. Those days, it was always outside the town.

Image source Pinterest
Adi Shankara looked at these few people in their inebriated condition. You know, drunkards always think they are having the best time of their life and everyone else is missing it. So they made some comments at him. Without a word, Adi Shankara walked into the shop, took a pitcher, drank it and walked on.

He said, “Move away.” That man just stood there and said, “What should move away, me or my body?” That is all he asked.

Behind him, his disciples were trotting and among themselves they started discussing, “When our guru can drink, why can't we?” Adi Shankara was aware of what was happening. When he came to the next village, there was a blacksmith working there. Adi Shankara went inside, picked up the pot of molten iron, drank it and walked on. Now you are not going to imitate him!