Two days after the clashes at Jahangirpuri in northwest Delhi, a police investigation team came under attack on Monday as it went to the house of a 28-year-old man who was seen firing a gunshot during the riots in the area on Saturday evening. 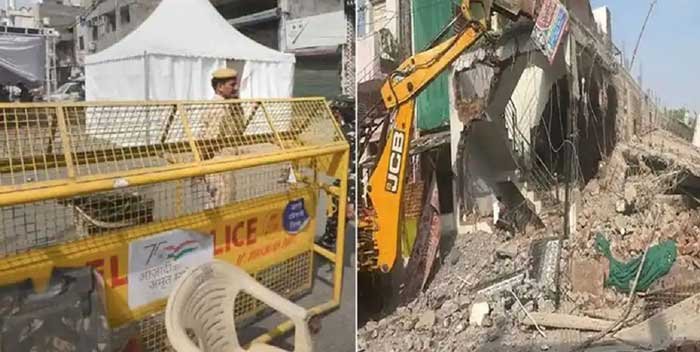 The anti-encroachment drive in Delhi’s Jahangirpuri area started on Wednesday morning under heavy police and paramilitary forces deployment. The drive comes four days after the area witnessed violent clashes, including alleged stone-pelting, arson, and firing between two communities during a Hanuman Jayanti procession. In a video shared by news agency ANI, a bulldozer can be seen taking down what appear to be roadside food stalls and shops. The bulldozer was surrounded by the local public and police personnel can be seen trying to keep the situation under control.

Deputy Commissioner of Police (DCP), North West, Usha Rangnani was seen inspecting the area ahead of the two-day eviction drive in a separate video shared by ANI. The drive was undertaken a day after Delhi BJP chief Adesh Gupta wrote to the party-ruled North Delhi Municipal Corporation (NDMC) to identify illegal constructions of “rioters” in Jahangirpuri and demolish them using bulldozers, news agency PTI reported. The NDMC had on Tuesday requested the Delhi Police to provide at least 400 security personnel to maintain law and order during the eviction drive.

#WATCH | Anti-encroachment drive underway at the Jahangirpuri area of Delhi which witnessed violence on April 16 during a religious procession pic.twitter.com/zIxMVccwSM

At least 25 people have been arrested so far in the Jahangirpuri clashes and Delhi Police Commissioner Rakesh Asthana has said action will be taken against the guilty irrespective of class, community, or religion. The Delhi Police also slapped the stringent National Security Act (NSA) on five persons arrested in connection with the clashes. Two prime accused of the Jahangirpuri violence - Ansar and Aslam - were sent to police custody and four others were sent to judicial custody for 14 days.

14 teams have been formed to investigate the violence that left nearly a dozen, including at least eight policemen, injured and several vehicles reportedly torched. The Delhi Police has been carrying out drone patrolling, and intensive rooftop surveillance in sensitive areas. Additional forces have been deployed and meetings with Aman (peace) committee members are being held to maintain law and order in the city, police officials told news agency PTI.