Barcelona and Celta Vigo met at the Nou Camp with little to play for as the 2021-22 La Liga season winds down. Still, the match provided plenty of entertainment as always with these two, as Pierre-Emerick Aubameyang’s brace led Barcelona to a 3-1 victory over 10-man Celta Vigo. 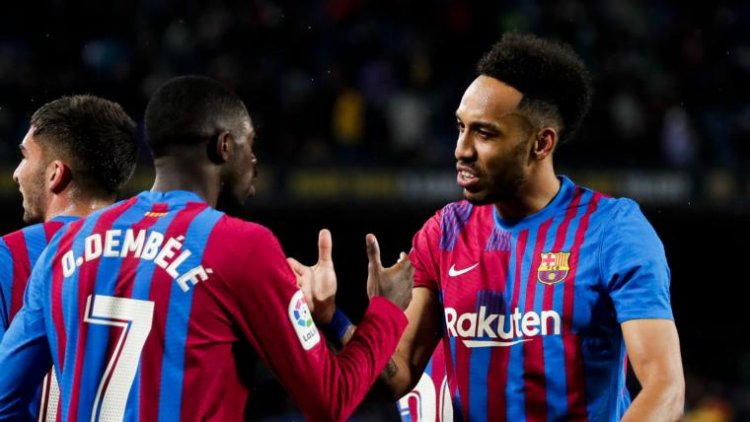 Ousmane Dembele, as he has many times through 2022, starred in the build-up. He tore the Celta Vigo left flank to shreds and helped the hosts find the back of the net their first three shots on target of the match.

Down 3-0 early in the second half, Celta Vigo picked up one back through a mistake by Barcelona goalkeeper Marc-Andre ter Stegen which Iago Aspas finished off. That was all the visitors had, however, as halftime substitute Jeison Murillo was sent off in the 58th minute for a last-man foul.

After the decision, it was all Barcelona the rest of the way.

LATEST NEWS | Ronald Araujo has suffered a concussion and has been taken to the hospital to undergo further testing pic.twitter.com/XdcgtO2dpn

There was a scary moment on the hour mark as Ronald Araujo, having taken a blow to the head moments earlier, went down off the ball. He required immediate medical attention as players from both teams frantically waved for medical personnel, and he was eventually taken off the field in an ambulance and transported to the hospital.

Ambulance straight on for Araujo, fans changing for the Uruguayan pic.twitter.com/iVpBbhYQel

Xavi will have a massive selection headache next week against Getafe: In addition to Araujo’s likely absence, the trio of Frenkie de Jong, Eric Garcia, and Jordi Alba all picked up yellow cards that trigger a suspension for the next match.

The hosts have significant issues in midfield to deal with. Pedri, Sergi Roberto, and Nico Gonzalez are all out injured, and the ageless Sergio Busquets is suspended for yellow card accumulation. While fan-favorite Riqui Puig was an option in midfield, instead Memphis Depay drops into midfield in a very attacking lineup.

Along the back line there are problems as well. Gerard Pique remains sidelined with a muscle injury, as does American Sergino Dest, while goalkeeper Marc-Andre ter Stegen returns after missing out over the weekend with an illness.

Young Ansu Fati scored a critical goal off the bench against Real Betis last weekend, having returned from his lengthy injury absence to make two substitute appearances, and but he's not yet ready for a starting role.

Celta Vigo are one of the healthiest teams in La Liga, with defender Hugo Mallo the only player on the sidelines with a patella fracture. Otherwise, the team is fully fit.

The biggest decision for manager Edouard Coudet was possibly upsetting the regular starting lineup for the likes of Renato Tapia or Nolito, who both made a significant impact off the bench in the 4-0 romp of Alaves last time out. The quick turnaround could be a factor, but upsetting the natural order comes with risks, and he has decided to make no changes.

Nolito, in fact, does not make the matchday squad at all, while Tapia is again on the bench.

How to watch Barcelona vs. Celta Vigo

UK: The Barcelona-Celta match will be broadcast on La Liga TV, which is available to stream on Amazon Prime UK.

USA: The Tuesday match is available in the United States exclusively on the streaming service ESPN+, which carries all La Liga action.

Canada: In Canada the broadcast is available via TSN via TV and streaming platforms.

Australia: Fans in Australia can watch the match on beIN Sports.

Every club has a bogey team. Celta Vigo are just that for Barcelona.

Currently sitting 11th in the La Liga table, Celta Vigo have achieved a result in five of the last eight league matches against Barcelona. Often, they leave it late. In the last seven league games between these two clubs in which Celta Vigo found the back of the net, the underdogs were the last team to score in six of them, including the last two in which dramatic late strikes earned Celta Vigo points.

Late goals have also punctuated the Barcelona season of late, with three of their last five league matches seeing late strikes in the final 10 minutes plus stoppage time. As Barcelona grapple with injury, this is set up for another thriller, and Celta Vigo can come away with points.