Be careful, this is the reason for feeling like vomiting after eating food

Do you feel like vomiting after eating food? Do you vomit after eating? This problem occurs due to many reasons. So let's know which home remedies can be useful in such a situation. 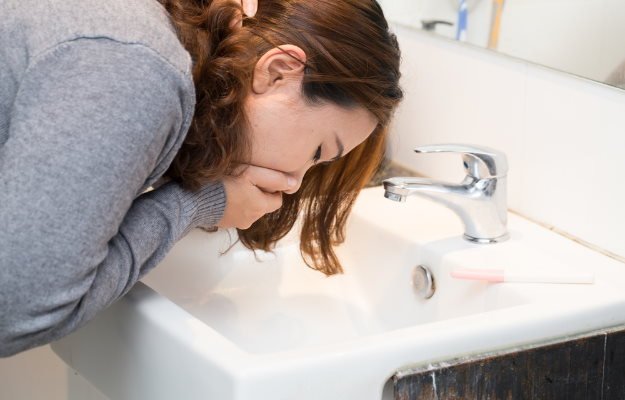 Do you feel like vomiting after eating food? Do you vomit after eating? Vomiting or feeling like vomiting immediately after eating food occurs due to many reasons. One reason for this can also be acidity. As food enters the stomach, acid is produced in the stomach and this causes acid reflux and increases the chances of vomiting. Similarly, eating too much food also causes vomiting. So at the same time, anxiety and stress also cause vomiting. Vomiting is common in pregnancy. Jaundice, vomiting due to loss of blood also occurs. There can be many reasons for feeling nauseous after eating this type of food.

Acidity can be a possible reason for the problem of vomiting after eating food. Because it may be that when you eat food, as soon as the food goes into your stomach, acid is formed in the stomach and if the acid is made more than it causes acid reflux and acidity problem occurs. Food is not possible at the speed at which it should move. There is peristalsis in our intestines, even when this action is not done properly, a reflex is formed and vomiting can occur.

2. contraction of the diaphragm

The diaphragm separates the chest cavity from the abdominal cavity. If the diaphragm contracts frequently, it can also lead to vomiting.

Vomiting can also occur due to lack of blood in the body.

Vomiting can also be caused by eating medicines that cause vomiting.

If any disease is developing in the stomach, then the symptom of vomiting is also seen. Different symptoms are seen in this problem, but one symptom is also vomiting. Vomiting will occur even if there is cancer in the stomach and vomiting can also occur in the problem of gas in the stomach. There are many such reasons.

If your stomach is empty and you haven't eaten anything, you may still feel nauseous. But there will be no vomiting. Because there is nothing in your stomach that will come out.

How do doctors test for vomiting?

Vomiting can occur after eating food due to many reasons. When the patient goes to the doctor, the cause of the disease is ascertained by looking at the symptoms. So at the same time the doctor says that if the patient does not have any symptoms like fever, diarrhea, that is, he is fine, but still he has a desire to vomit, then the doctor takes the history of such a patient. Based on that, the doctor conducts some tests. Such as a CBC test, which will detect anemia. LFT KFT test which shows the condition of liver and kidney.

Vomiting also occurs due to liver problems and kidney problems. Ultrasound is also done for further investigation. To know if there is any stone or pathology.

First of all, if the problem of vomiting persists for several days and the effect is not visible by adopting home remedies, then you should go to the doctor. But before that you can adopt this remedy. If these don't help, be sure to see a doctor. Doctor Anurag Sharma has given the following measures to avoid the problem of vomiting after eating food-

Do not eat all the food in one go. If you eat twice a day, then eat the same food thrice a day. Don't eat everything at once. The frequency of eating has to be increased but the quantity should be kept the same.

Eat food by 7 in the evening. Don't eat at 8 o'clock. Do not lie down after eating food. The food is not digested properly by lying down.

Exercise after meals. Like you can walk for 1 hour. Do not sleep immediately after eating food.

If a person is intoxicated with alcohol, cigarettes, etc., then he should give up. Because due to them also there is a problem of vomiting.

The remedies mentioned above are at home only. Apart from this, the problem can also be diagnosed with medicines. He suggested the following methods of treatment-

Medicine is given to the patient who is having frequent vomiting or feeling like this. Medicines like Diazine, Pantop etc. can be given. But consume them only after consulting a doctor.

There can be many reasons for vomiting after eating food. Vomiting also occurs due to acid reflux in the stomach and vomiting is also felt due to lack of blood in the body. In such a situation, you can adopt home remedies for a few days only. If you are having this problem for a long time, then definitely consult a doctor. Don't ignore it.