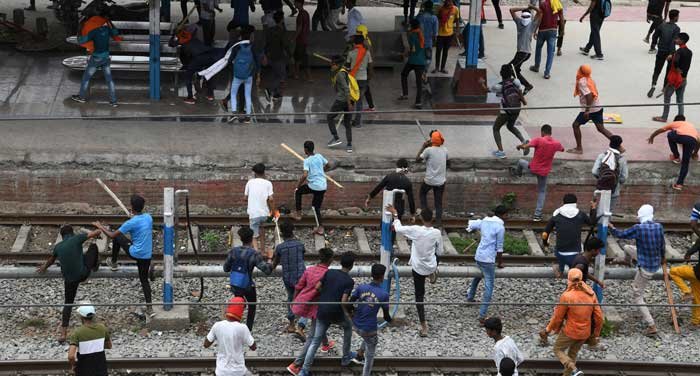 The Bihar bandh called on Saturday in support of the defense job aspirants’ demand for a rollback of the Centre’s Agnipath scheme witnessed sporadic incidents of violence in the state amid tight security arrangements by the police even as youngsters mostly stayed away from protests following security alertness.


More than a dozen vehicles parked outside Taregana station were set on fire, besides railway premises including the station master’s cabin and others. Reports from the Jehanabad district said that army aspirants and bandh supporters torched a bus and truck which were parked near the Theta police outpost. The two vehicles have been seized by the police in separate cases. Brick batting incidents were also reported from the area of Jehanabad.

In Arwal, protestors attacked an ambulance and thrashed its driver mercilessly. In Munger, protestors attacked the Tarapur block development officer’s (BDO) vehicle and damaged its windscreens between Tarapur-Sultanganj road. In Patna, some protestors used buffalo to block Dakbungalow intersections. They came from Hajipur on buffalo.

Activists from political outfits came out on the roads, blocked vehicular traffic, burnt tires, and disrupted vehicular traffic at different locations across the state. Additional director general (law and order) Sanjay Singh said, “So far, no untoward incident has been reported from any part of the state during the bandh. The police headquarters is monitoring the situation. Police forces including 30 companies of Bihar special auxiliary police (BSAP) and 10 companies paramilitary forces have been deployed at some sensitive locations and railway stations as a precautionary measure.”

1) Ahead of the bandh call, DMs, SSPs, and SPs led flag marches in their jurisdictions.
2) Internet services have been suspended in 12 districts while section 144 has been imposed in Siwan, Samastipur, Gopalganj, Katihar, etc.
3) On Saturday, the east-central railway canceled over 319 passenger and Mail/Express trains.
4) Considering that many trains were hit, the ECR announced a waive-off for the cancellation charges of the reserved tickets.
5) “Scores of passengers were affected due to obstruction in train operations. Therefore, on humanitarian grounds our staff provided water and food to passengers at stations”, said chief public relations officer, Birendra Kumar.

Why did Amitabh Kant, former CEO of NITI Aayog say so, we need 10 thou...

Flaxseed Health Benefits: Protein is filled in each and every grain of...