Dishes You Won't Want to Miss In Your Rajasthan Trip

Jaipur AKA Pink City is the capital of the state of Rajasthan in India. It is a mesmerizing land of vibrant colors, peachy quaint architecture, captivating gardens that make it a beautiful travel spot for many tourists. 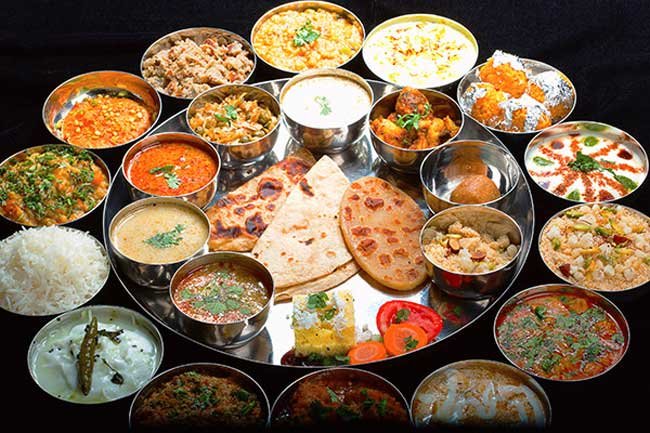 Rajasthan
Rich Rajasthani culture reflects the tradition of hospitality, one of its kind. Rajasthan region varies from arid desert districts to greener eastern areas. A varying degree of geography has resulted in a rich cuisine involving both vegetarian and non-vegetarian dishes. Rajasthani food is characterized by the use of Jowar, Bajri, legumes, and lentils, its distinct aroma and flavor are achieved by the blending of spices including curry leaves, tamarind, coriander, ginger, garlic, chili, pepper, cinnamon, cloves, cardamom, cumin, and rosewater. 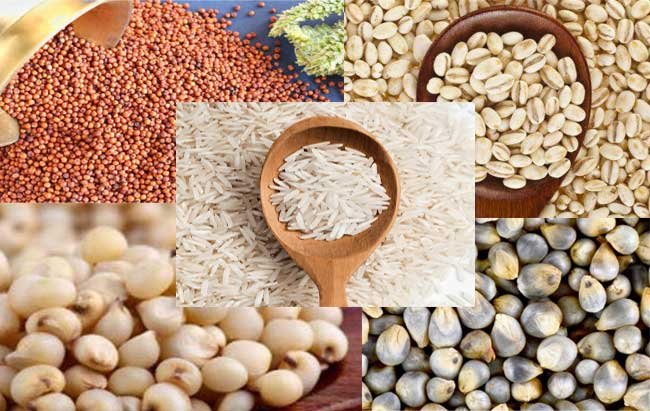 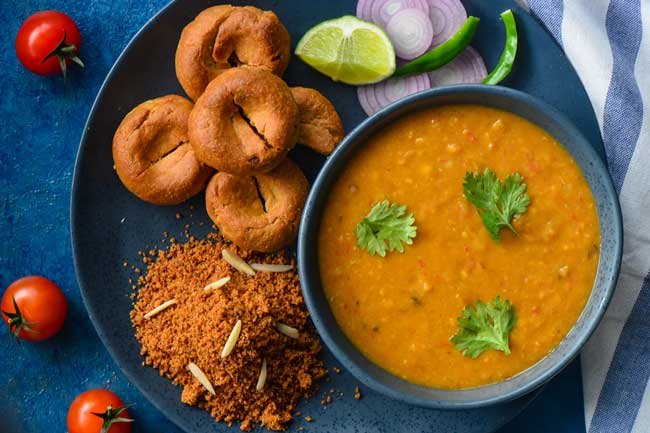 image source Vaya
What Chole Bhature is to Punjab, Dal Baati Churma is to Rajasthan. A quintessential Rajasthani dish, this three-in-one treat (baked baati with spicy panchmel dal and sweet crumbly churma) is revered as much for its simplicity as for its delicious taste. While this culinary gem is famed for its wonderful taste, the fascinating story behind its origin is virtually unknown.

Baati (little doughballs made of wheat flour, ghee, and milk) is believed to have originated during the time of Bappa Rawal – the founder of the kingdom of Mewar. Back then, the Rajputs were establishing their stronghold in the region and baati was their preferred wartime meal.

image source tarladalal
Pyaaz ki Kachori is a blend of crisp, crunch, and spice. This makes the best breakfast option in Jaipur. Served with chutney the snack comes under the list of famous dishes of Jaipur. It is known as a local snack filled with onions, potatoes, and a mixture of spiciness. Whenever in Jaipur you must try this incredible snack and relish the rich flavors of Pink City. 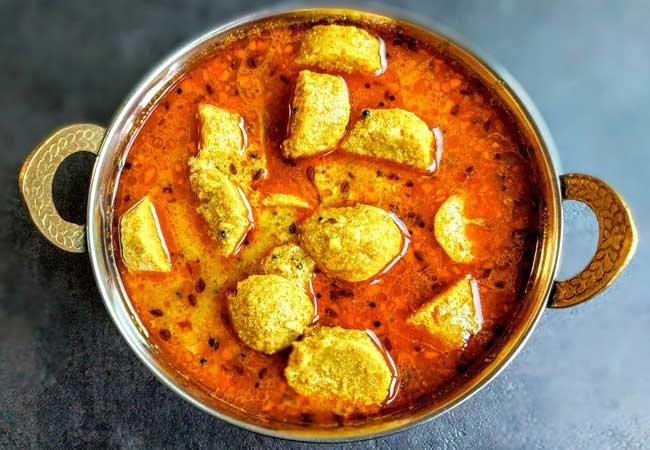 image source vegecravings
Gatte ki sabzi represents the true traditional taste of the most renowned dishes of Rajasthan. No wonder this is listed under the famous dishes of Jaipur. It consists of gram flour pieces i.e Gattas that are merged into traditional yogurt curry. This is too easy to cook and holds an excellent taste when cooked in pure ghee. This retains the specialty and spiciness of Rajasthan. Do not miss this dish when exploring the royalty and pink archaic architecture of the City. 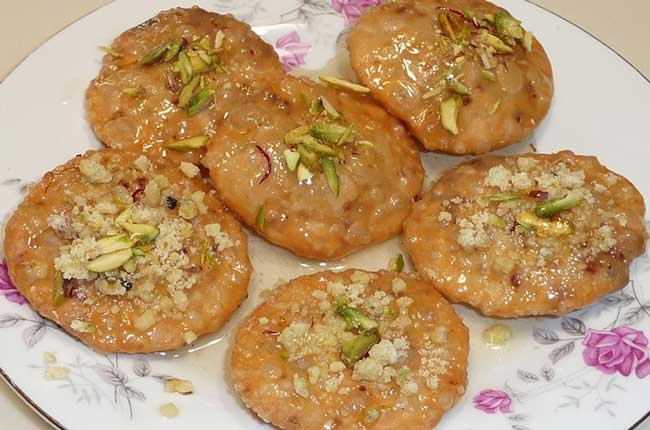 image from manjulaskitchen
One of the most famous dishes of Jaipur, mawa Kachori is an incredible dessert that is popular in the entire Rajasthan. We know the state of Rajasthan is renowned for its royalty and richness of the food. This Mawa Kachori depicts the optimum richness and royalty of Rajasthan. It’s a fluffy pastry filled with the mixtures of Mawa and lots of nuts makes an incredibly festive dessert. So don’t miss to taste the royalty of Rajasthan when touring its Capital or around. You can find this in various sweet shops like Laxmi Misthan Bhandar, Govind Sweet, Ridhi Sidhi Sweet Shot, etc. 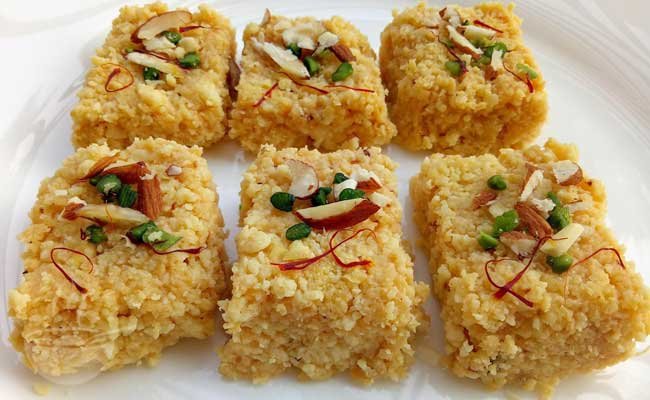 image source lakshmirecipes
Originating in Alwar, one of the oldest kingdoms of Rajasthan, Kalakand is fudgy blocks made from a rich mixture of sweetened milk and paneer, topped with saffron and nuts. Soft both inside and outside, this delectable confection will satiate even the sweetest sweet tooth. 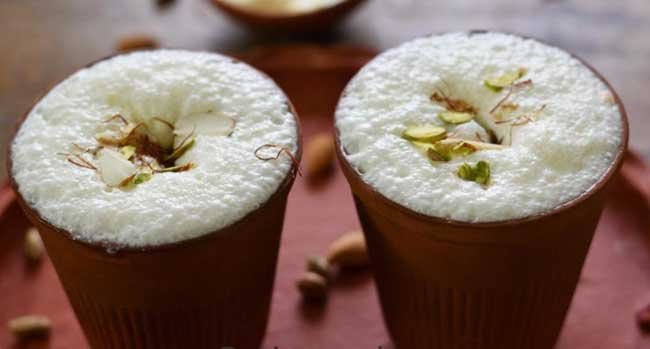 image source spicypunch
It’s the most liked drink of the natives of Jaipur. It is the most favored drink in summer. Don’t forget to try this creamy and wholesome sweet milk. This serves as another great breakfast option that can be tagged well with samosas or kachoris. There are many places where you can get a thick glass of Lassi, but we’d recommend MI Road and there you’ll find the ‘Lassiwala’. Try a glass of Lassi from there and you’ll come back again. 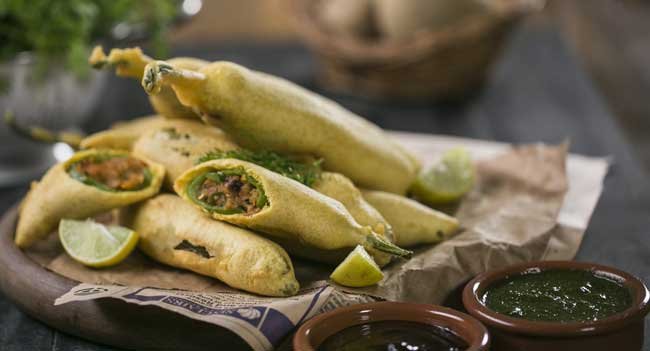 image source ranveerbrar
It’s a kind of snack that is usually consumed with a cup of tea or with a sweet/pudina chutney. This is spicy by taste because it holds the stuffing of green chilies along with other stuffing and dipped in flour (besan) and then deep-fried. You can eat this with your evening tea or during breakfast. You can find this in abundance in the walled city