Elon Musk suddenly reached the Twitter office before the deal, did this act with a sink in his hands

What did he do, Elon Musk suddenly reached the Twitter office before the deal with the sink in his hands. The video of this entire incident went viral..... 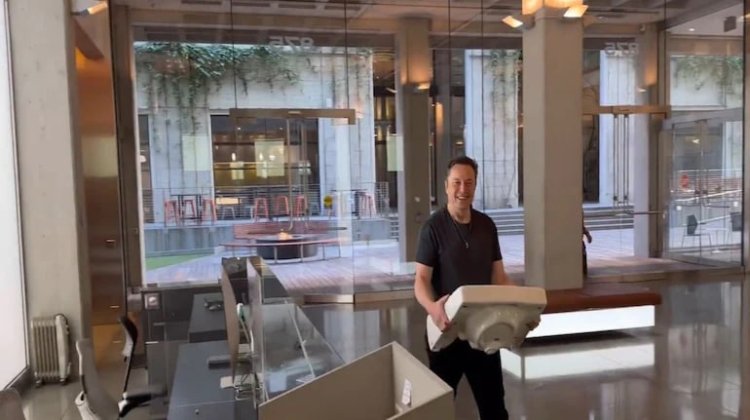 A day before the decision to buy micro-blogging site Twitter, Tesla CEO and world's richest man Elon Musk suddenly reached the company's headquarters. Musk himself tweeted that he had come to Twitter's headquarters in San Francisco. During this, a sink was also seen in Musk's hand. The same sink in which hands wash-scrubbing-rinse. Just then what was the speculation that what Elon Musk is going to do? Let us understand what is the whole matter.

Musk has until tomorrow, October 28, a Delaware court to complete his deal with Twitter. If they fail to do so, they will face a court case. There has been no statement from the company on Musk's visit to Twitter headquarters. But the video of Musk with sync in his Twitter office has gone viral. Actually, in the video tweeted by Elon Musk, he is seen in the Twitter head quarter with a sink. He himself enters the office by picking up the sink. He captioned the video and wrote, 'Entering Twitter HQ - let it sink in!'.

Met many good people in this office today. With this, Musk also made two changes on his Twitter handle. He first made the location 'Twitter Headquarters' in his Twitter profile. After this, he also wrote 'Chief Tweet' in the description. With all these antics of Musk, it seems that after seeing many ups and downs in the last six months, now Twitter will get a new boss. According to a report published in the Wall Street Journal, banks have also started sending $ 13 billion in funds to Elon Musk to complete the deal. It looks like the deal may be completed by the end of this week.

However, on Tuesday, a day before reaching the Twitter office, Elon Musk held a meeting with the bankers who funded the deal. According to a Bloomberg report, on Wednesday, Twitter's chief marketing officer sent employees a memo informing that Musk would visit the San Francisco headquarters this week to address employees. Twitter employees, on the other hand, wrote an open letter this week. In this, he opposed the alleged plan by Elon Musk to lay off two-thirds of the company's employees after completing the deal. For your information, let us tell you that Musk is planning to sack 75 percent of the employees from Twitter, such reports have come before.