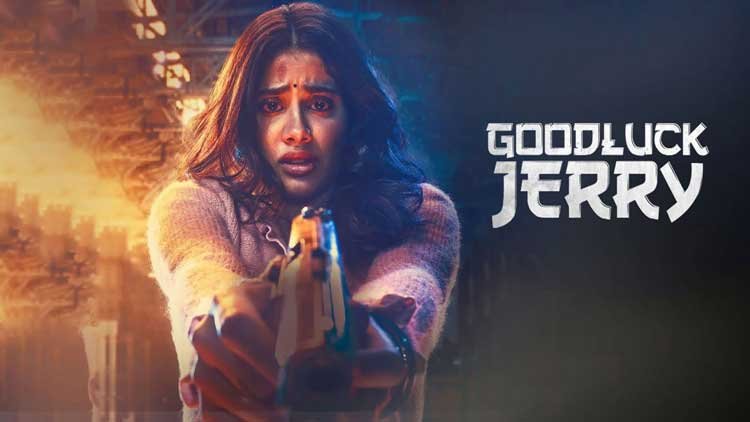 A Bihari girl moves to Punjab and gets mixed up in the state’s nefarious drug trade. At first, Good Luck Jerry struck me as a retread of Udta Punjab (2016). With two major differences. One, Siddharth Sengupta’s film is a remake (of Kolamaavu Kokila, from 2018). Two, there’s nothing truly ‘nefarious’ or intimidating about these drug dealers. One guy, for instance, has a brace around his neck.

When the film starts, Jerry is down on her luck, working as a masseuse and helping her mother (Mita Vashisht) and younger sister (Samta Sudiksha) sell momos out of their rundown home. “Only veg momos,” her mother declares proudly, parceling them out in batches for assorted local northeastern to sell. The mix of migrant identities leads to a nice bit, where a racist joke elicits a prompt racist jibe. When her mother comes down with cancer, Jerry tries desperately to gather the treatment money.

I know it’s too soon to say anything but i can say janhvi’s acting skills in this movie will be on another level #GoodLuckJerry pic.twitter.com/L342ueE5JL


She’s eventually hired by Timmi (Jaswant Singh Dalal), a local gangster, who sees potential in the lone shy girl ferrying heroin packets in her tiffin box. As Jerry starts breaking sad, the film kicks into high gear. There are some funny sequences (a rooftop interrogation nicely oscillates between danger and farce). But there are also a lot of empty quirks: gaudy set decorations, a song called ‘Paracetamol’, Deepak Dobriyal in funky golden boots, and a jacket with peacocks on them. Deepak—one of our best, most effortlessly comedic actors— struggles to perk up this film.

delivers yet another terrific performance in Good Luck Jerry. After being loved in Gunjan Saxena, she continues to hone her craft and grow as an actor! pic.twitter.com/EhBx6hWKJd


Throughout the film, Jerry is hectored, harassed, and talked down to by the men in the story. Her household, too, is frequently beset by unsolicited male interference. The mounting discomfort makes you wait for a payoff. Yet, in the film’s climax, Jerry is all but forgotten as cops and criminals convene for a chaotic stand-off. She does wise up and take control of her story, but not in a way that’s thrilling or revelatory or makes a lasting point. It would have still worked if the other characters weren’t so darned cartoonish.

“There is only one difference between selling momos and selling drugs,” Jerry says at one point, “The difference of fear.”