Helicopter Crash: Leader of the Opposition in the Legislative Assembly Dharamlal Kaushik raised many questions regarding the death of the pilots in the helicopter crash. He said that there should be a high level investigation of this whole matter. 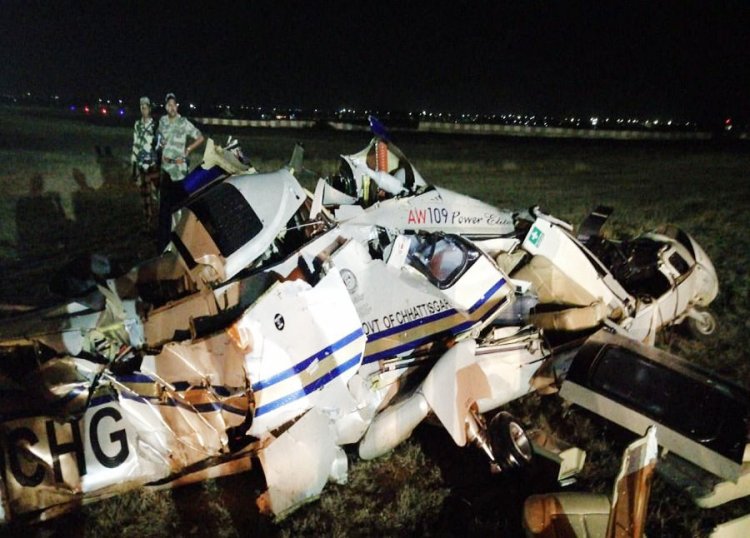 Chhattisgarh's main opposition Bharatiya Janata Party (BJP) has questioned its maintenance after the death of two pilots in the state government's helicopter crash on Thursday and demanded a high-level inquiry into the incident. The state government's AgustaWestland helicopter crashed during a practice flight on Thursday night at the Swami Vivekananda Airport in Raipur, the state capital.

Two pilots, Captain AP Srivastava and Captain Gopal Krishna Panda, have died in this incident. On the death of the pilots in the helicopter crash, Leader of Opposition in the Legislative Assembly Dharamlal Kaushik said on Friday, 'Captain Panda was an experienced and trained pilot. He was serving in the state for 11 years. Then how did such an incident happen? Every technical aspect of the helicopter needs a thorough investigation. Was there any technical fault already in the helicopter which led to the accident?'

Kaushik said, "A high level inquiry should be conducted to find out whether proper attention was being given to its maintenance including servicing or not." When asked about the safety standards of the helicopter, Kaushik said, "Agusta helicopter is considered to be a better helicopter and it is also used during election campaigns. It is reliable not only in Chhattisgarh but also in the country.

Was in service for 15 years:

The BJP leader said, "If the Congress is saying that it was bought during our government in 2007 and they are questioning its safety standards, then it is ridiculous." The helicopter was in service for 15 years. If it was bad how did it work for so long? It remains to be seen how it was being kept. If your vehicle breaks down due to lack of maintenance then its manufacturer cannot be blamed.

Kaushik also demanded compensation and government job for the kin of the pilot who died in the accident. Responding to Kaushik's statement, Chhattisgarh Pradesh Congress Committee spokesperson Sushil Anand Shukla said that the BJP should not politicize the incident. Shukla said, 'The helicopter accident is sad, in this incident two of our brave pilots have died. Congress Party expresses its humble tribute. The Congress party and the government stand with the families of these pilots. Certainly the damage done cannot be undone. The important thing is that the Leader of Opposition should not do politics in this tragic incident. This is not the time to raise these questions which have been raised by him.

He said, 'Definitely the cause of the incident will be investigated. But when the question arises, then the biggest question that arises is whether its safety standards were taken care of at the time of purchase of AgustaWestland Helicopter. Even at that time, the Congress party had questioned the safety standards of this helicopter. Many technicians also raised questions. Not only the security standards, but after its purchase, its price and scam were also discussed. A committee of the Legislative Assembly also conducted an inquiry. Leader of Opposition Kaushik and former Chief Minister Raman Singh should also answer this. Senior state officials said that a team of Aircraft Accident Investigation Bureau (AAIB), an organization working under the Ministry of Civil Aviation, has reached Raipur to investigate the helicopter crash.