When they reached the examination center in an auto-rickshaw, officials asked them to follow the dress code. But the girls refused and tried to convince the invigilators and the college principal for around 45 minutes. 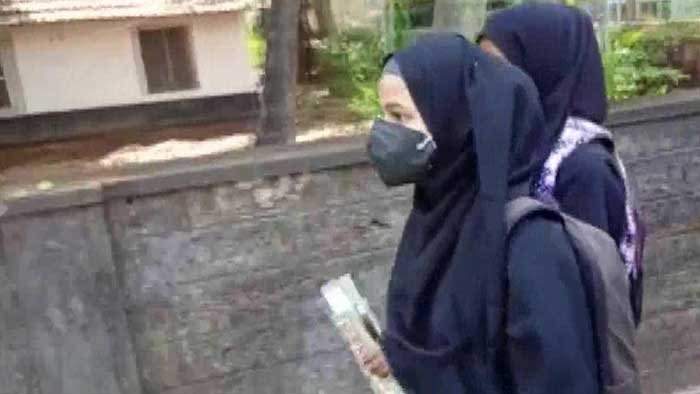 Two girl students who had first petitioned the court seeking permission to wear Hijab inside classrooms in Karnataka's Udupi were today not allowed to appear in the class 12 board examination. According to news agency ANI, they returned from the examination centre at the Vidyodaya PU College after they arrived wearing burqas. The two girls had earlier collected hall tickets. When they reached the examination centre in an auto-rickshaw, officials asked them to follow the dress code. But the girls refused and tried to convince the invigilators and the college principal for around 45 minutes.

They were eventually not allowed any exception to the court order upholding the state government's ban on wearing hijab inside the school. They were then seen quietly leaving the premises without taking the exams. The exam which began on Friday will go on till May 18. The first paper was Business Studies. Over 6.84 lakh students will write the exam at 1,076 centres across the state.

Udupi | Two students, who are fighting a legal battle for the hijab, leave the PUC examination centre after they were allegedly not permitted to take the exam wearing hijab#Karnataka pic.twitter.com/9NgVmqzGVM


Earlier on January 1, six girl students of a college in Udupi attended a press conference held by the Campus Front of India (CFI) in the coastal town protesting against the college authorities denying them entry into classrooms wearing headscarves.

This was four days after they requested the principal permission to wear hijab in classes which were not allowed. Till then, students used to wear the headscarf to the campus, but entered the classroom after removing it, college principal Rudra Gowda had said. The reason was that the Hindu girls started coming to the college wearing saffron scarves to protest the permission granted to Muslim girls to violate the college uniform.