UP Budget Session. FM Suresh Khanna said 10,000 startups and 100 incubators will be set up in five years in the state to promote entrepreneurship and innovation in various fields among the youth. 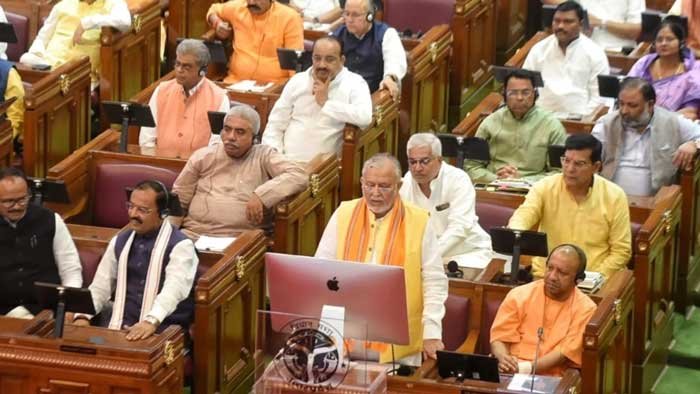 On Friday, Uttar Pradesh finance minister Suresh Khanna presented the first budget of the Yogi Adityanath government in its second term in the Legislative Assembly. Khanna said 10,000 startups and 100 incubators will be set up in five years in the state to promote entrepreneurship and innovation in various fields among the youth. As part of the Lok Kalyan Sankalp Patra, 2022, a target has been set to distribute two crore smartphones and tablets in the next five years among the youth of urban and rural areas to make them technically competent, the FM said.

He said the free tablet/smartphone distribution scheme was launched on December 25, 2021, under which about 12 lakh tablets/smartphones were made available to the districts for distribution. Under the Swami Vivekananda Yuva Sashaktikaran scheme, a provision of ₹1500 crore has been proposed for the financial year 2022-2023.

Khanna said UP ranked at the top in providing annual financial assistance worth ₹6,000 each to 250 crore farmers from the Prime Minister's Kisan Samman Nidhi scheme. The FM proposed a provision of ₹523.34 crores for the implementation of the scheme in Lucknow, Gautam Budh Nagar, Agra, Varanasi, Gorakhpur, and Prayagraj for the safety of women under the Safe City scheme.

An amount of ₹250 crores was proposed for security equipment and weapons for district police stations. He said a forensic science institute is being set up in Lucknow. The finance minister Suresh Khanna said tATS centers will be constructed in Meerut, Bahraich, Kanpur, Azamgarh, and Rampur. Apart from this, UP Special Security Force has been formed for the security of important establishments of UP, for which a provision of ₹276.66 crores was proposed.

A provision of ₹730.88 crores was proposed for the second phase of the UP-112 scheme. In a bid to develop sports, the FM proposed setting up of ‘Khelo India Centres’ in every district of the state under the Centre's one-district one-sports scheme. The Uttar Pradesh government had indicated that the GSDP for the financial year may remain at about ₹19.10 lakh crore.