Burger King is an American-based multinational chain of hamburger fast-food restaurants. Headquartered in Miami-Dade County, Florida, the company was founded in 1953 as Insta-Burger King, a Jacksonville, Florida–based restaurant chain. 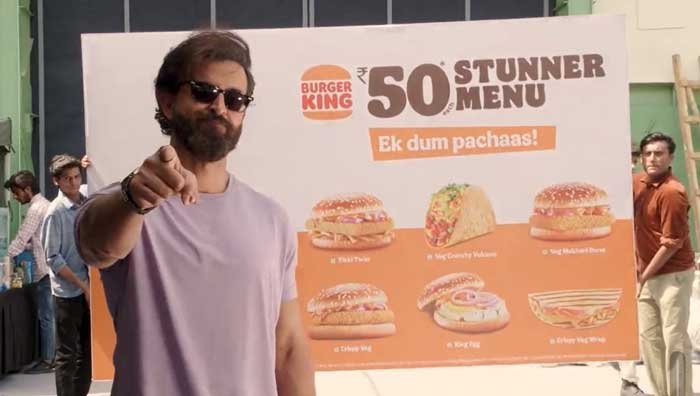 A recent video featuring Bollywood actor Hrithik Roshan and Burger King's new Stunner Menu poster left the internet baffled. While Hrithik Roshan was in Mumbai's film city, it seemed that Burger King decided to pull a fast one on him!

As the actor stepped out of his vanity van, he posed for the photographers before making his way into the studio. However, Roshan had no idea that Burger King had strategically placed a billboard behind him to make it appear as if he was endorsing their 'Rs 50 Stunner Menu'.


The hamburger fast-food chain's 'Jugaad' advertisement caused quite a stir online.
On June 12, Roshan shared the video of the advertisement on Twitter with the caption, "@burgerkingindia, this is not done."
However, Hrithik recently posted short videos on his official Instagram page advertising Burger King's Stunner Menu, hash-tagging it as a collaboration.

"@BurgerKingIndia it wasn't cool but has left a stunning aftertaste indeed. #collab" captioned the actor.

Social media users were intrigued by the innovative ad. Since it was shared, Hrithik's post has received 424,879 likes. The videos were tweeted by Burger King too.