there was a king named Kartavirya. His full name was Kartaviryarjuna. He was very honest and religious mined. He became very tired by performing royal duties. 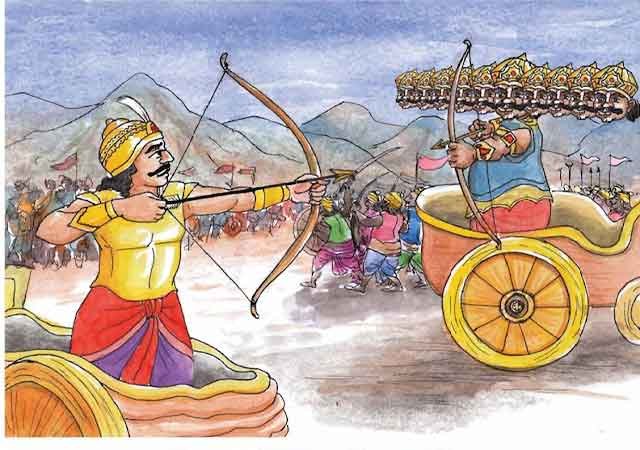 In ancient times, there was a king named Kartavirya. His full name was Kartaviryarjuna. He was very honest and religious mined. He became very tired by performing royal duties. Tiredness should be removed. So he left the capital city for a quiet place. The place was very nice. Surrounded by a forest, there was a beautiful place in the middle of the forest. On their side of the palace, there was a large late. There were many blooming loti at the lake. A gentle cold breeze was blowing. On coming here, even tiredness gets removed naturally. The king of Kartavirya decided to stay there for some days.

At that time, Ravana was the king of Lanka. He was very outrageous. When he gets scope he attacked other’s kingdoms. By fighting, he occupied the kingdom. He came to know that king Kartavirya was not present in the capital. At this opportunity, he attacked the Kartavirya’s kingdom.

King Kartavirya had been informed. When he knew that his kingdom was attacked by Ravana; he was very much angered like a burning fire. Without delay, he returned to the capital at that time. He went directly to the battlefield. There was heavy fighting between the two groups. On the battlefield, one group was an attacker or an occupier. Other group was attacked and were inspired by patriotism.

Kartavirya addressed his army with a loud voice, ‘Soldiers, if defeated, the country would go under foreign domination. Protect the independence of the country.” Soldiers were encouraged by the statement of Kartavirya. They fought even at the cost of living. Kartavirya won the battle and Ravana was defeated.

Ravana accepted the defeat and asked for forgiveness. Kartavirya forgave him but on one condition. The condition was that Ravana should not attack others’ Kingdoms. Ravana bowed down his head in shame and returned to his kingdom. Kartavirya protected the country. King Kartavirya becomes an immortal figure of patriotism.

Moral of the Story
We shall be patriotic like Kartavirya. Like honest and pious people we should love our country. We should do work for the welfare and development of the country. Always we should stay to protect the independence of the country.