Mother Mary Teresa Bojaxhiu, honored in the Catholic Church as Saint Teresa of Calcutta, was an Albanian-Indian Roman Catholic nun and missionary. She was born in Skopje, then part of the Kosovo Vilayet of the Ottoman Empire. 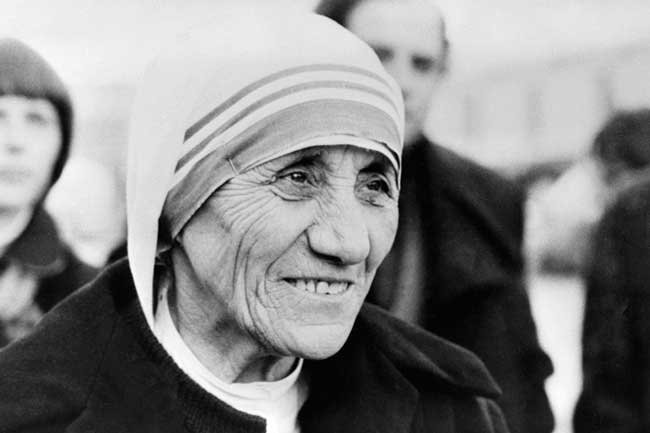 About Mother Teresa
Mother Teresa (Anjezë Gonxhe Bojaxhiu) was born on 26 August 1910, Skopje, the capital of the Republic of Macedonia. Little is known about her early life, but at a young age, she felt a calling to be a nun and serve by helping the poor. At the age of 18, she was given permission to join a group of nuns in Ireland. After a few months of training, with the Sisters of Loreto, she was then given permission to travel to India. She took her formal religious vows in 1931 and chose to be named after St Therese of Lisieux – the patron saint of missionaries. 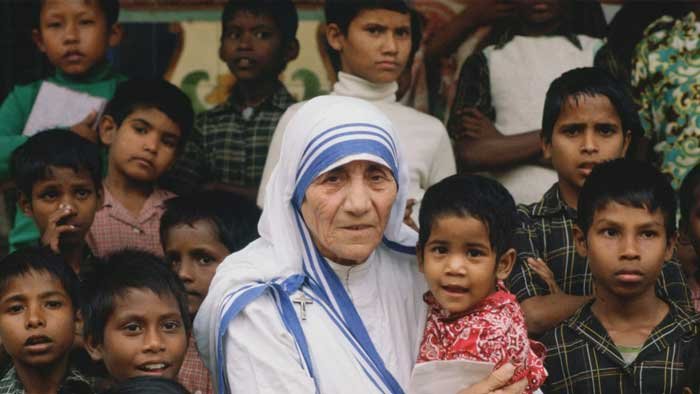 image source Pinterest
On her arrival in India, she began by working as a teacher; however, the widespread poverty of Calcutta made a deep impression on her, and this led to her starting a new order called “The Missionaries of Charity”. The primary objective of this mission was to look after people, who nobody else was prepared to look after. Mother Teresa felt that serving others was a fundamental principle of the teachings of Jesus Christ. She often mentioned the saying of Jesus,
“Whatever you do to the least
of my brethren, you do it to me.”

Her Faith And Religion
Mother Teresa never sought to convert those of another faith. Those in her hospices were given the religious rites appropriate to their faith. However, she had a very firm Catholic faith and took a strict line on abortion, the death penalty, and divorce – even if her position was unpopular. Her whole life was influenced by her faith and religion, even though at times she confessed she didn’t feel the presence of God.

The Missionaries of Charity now have branches throughout the world including branches in the developed world where they work with the homeless and people affected by AIDS. In 1965, the organization became an International Religious Family by a decree of Pope Paul VI. In the 1960s, the life of Mother Teresa was brought to wider public attention by Malcolm Muggeridge who wrote a book and produced a documentary called “Something Beautiful for God”.

Home For The Dying
She experienced two particularly traumatic periods in Calcutta. The first was the Bengal famine of 1943 and the second was the Hindu/Muslim violence in 1946, before the partition of India. In 1948, she left the convent to live full-time among the poorest of Calcutta. She chose to wear a white Indian sari, with a blue border, out of respect for the traditional Indian dress. For many years, Mother Teresa and a small band of fellow nuns survived on minimal income and food, often having to beg for funds. But, slowly her efforts with the poorest were noted and appreciated by the local community and Indian politicians.

“Love cannot remain by itself – it has no meaning.
Love has to be put into action, and that action is service .”

image source discoverwalks
In 1952, she opened her first home for the dying, which allowed people to die with dignity. Mother Teresa often spent time with those who were dying. Some have criticized the lack of proper medical attention, and their refusal to give painkillers. Others say that it afforded many neglected people the opportunity to die knowing that someone cared. Her work spread around the world. By 2013, there were 700 missions operating in over 130 countries. The scope of their work also expanded to include orphanages and hospices for those with terminal illnesses.
“The hunger for love is much more
difficult to remove than the hunger for bread.”

Her Last Few Years
When she was asked how to promote world peace, she replied,” Go home and love your family”.
Over the last two decades of her life, Mother Teresa suffered various health problems, but nothing could dissuade her from fulfilling her mission of serving the poor and needy. Until her very last illness she was active in traveling around the world to the different branches of The Missionaries of Charity. During her last few years, she met Princess Diana in the Bronx, New York. The two died within a week of each other.
“Mother Teresa, in all aspects of her life,
was a generous dispenser of divine mercy, making herself available
for everyone through her welcome and defense
of human life, those unborn and those abandoned and discarded,”
In 1979, Mother Teresa was awarded the Nobel Peace Prize and became a symbol of charitable, selfless work. In 2016, Mother Teresa was canonized by the Roman Catholic Church as Saint Teresa.