Nine forms of Maa Durga and the special prasad offered to them. 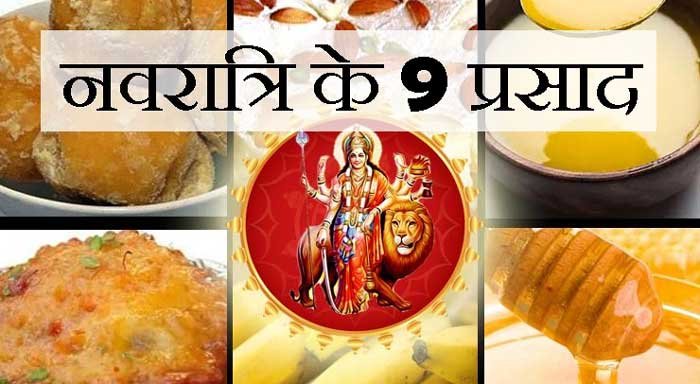 Navratri is a nine-day festival in which nine forms of Goddess Durga are worshipped. It is one of the most significant festivals celebrated by Hindus all across India with great fervor. There are a total of four Navratris in a year, but only two - Chaitra Navratri and Sharad Navratri are celebrated widely. People in different parts of the country celebrate this same festival differently. Though they worship the same deity, performing different rituals.
‘Navratri’ in Sanskrit means nine nights. On these nine nights, people observe fast and offer special prayers to the ‘Nine Forms of Maa Durga’. Goddess Durga is an incarnation of Goddess Parvati. She took the avatar of Devi Durga to destroy Mahishasura. 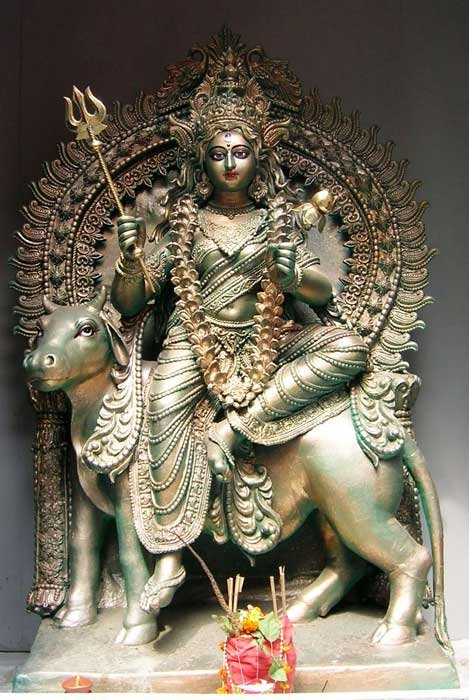 image source Wikipedia
Goddess Shailputri is the first manifestation of Goddess Durga. She holds a Trishul in one hand and a lotus in the other and rides a bull called Nandi. Goddess Parvati was born as the daughter of Himalaya and in Sanskrit, Shail means the mountain, thus she is known as Shailputri.
What to offer: Devotees offer pure ghee on the foot of Goddess Shailputri. It is believed that by offering pure ghee the devotees are blessed with a life free of diseases and illness. 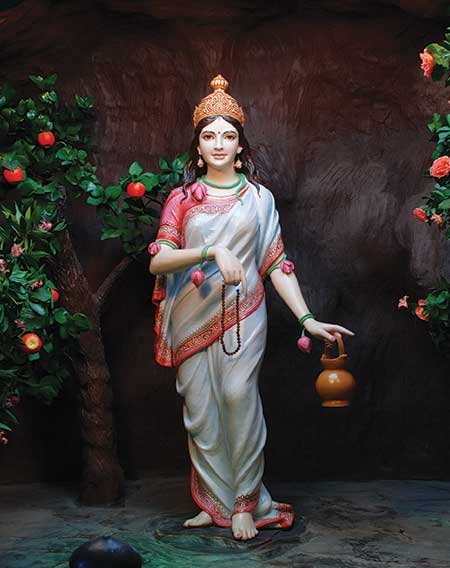 image source Bhagwan ki Photo
The second day of Navratri is dedicated to Goddess Brahmacharini. The goddess walks bare feet with a rudraksha mala in one hand and a sacred Kamandalu in the other. The meditative form of this goddess symbolizes Goddess Parvati when she engaged in her deep meditation to please Lord Shiva.
What to offer: Goddess Brahmacharini is offered sugar for the longevity of the family members. 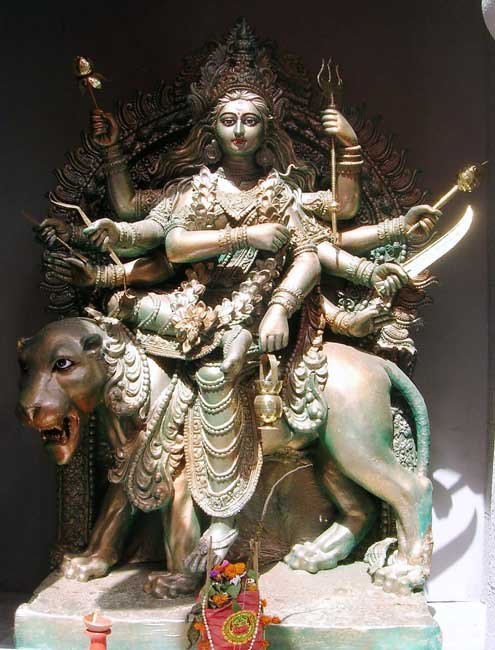 image source Wikipedia
The third day of Navratri is of Goddess Chandraghanta. She is a fierce 10-armed goddess with a crescent moon on her forehead, which gives her the name Chandraghanta. She rides on a tiger to destroy all evil.
What to offer: The ferocious goddess is pleased with Kheer. She is known to drive away all pains. 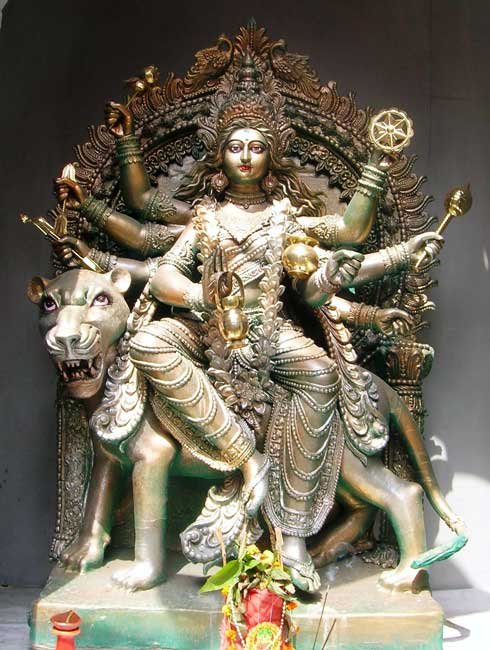 image source Wikipedia
Chaturthi or the fourth day of Navratri is of Devi Kushmanda. The name Kushmanda is derived from three words - ‘Ku’ (little), ‘Ushma’ (warmth or energy), and ‘Amnda’ (egg), which means the creator of the universe.
What to offer: Devotees offer Malpua to Maa Kushmanda to improve their intellect and decision-making ability. 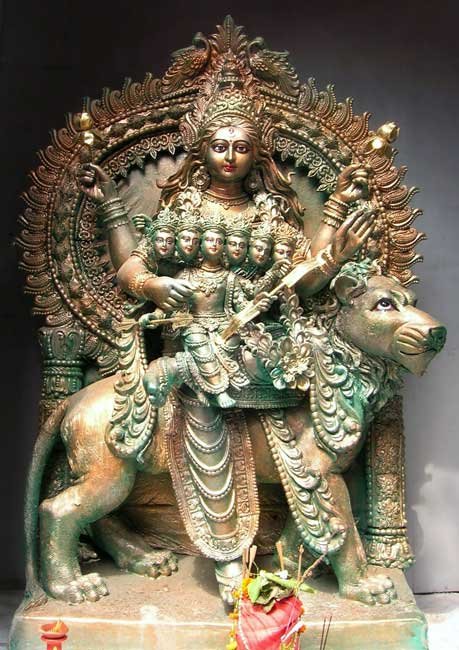 image source Wikipedia
Goddess Skandmata who is worshipped on the fifth day is also known as Panchami. Skandmata is a four-armed deity, who carries a lotus in two of her arms with a sacred Kamandalu and a bell in the other two. She also carries a little Kartikay on her lap and because of this Kartikay is also known as Skanda. She is seated on a lotus.
What to offer: Bananas are the favorite fruit of Goddess Skandmata. 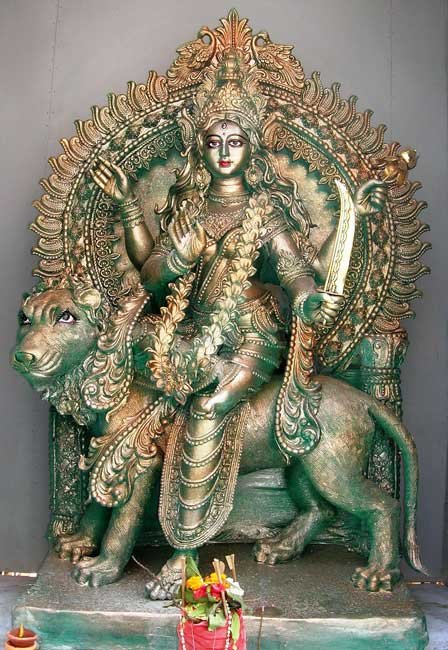 image source Wikipedia
The sixth day of Navratri is dedicated to Goddess Katyayani, who is a form of Shakti. Also known as the warrior goddess, Katyayani is considered one of the most violent forms of Goddess Parvati. She has four arms and carrying a sword. She is the daughter of Sage Katyayan and rides on a lion.
What to offer: Devotees offer Honey as a prasad to Devi Katyayani. 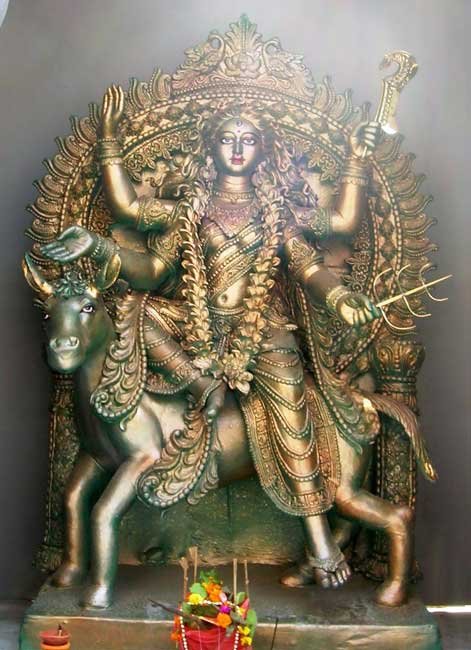 image source Wikipedia
Saptami or the seventh day of Navratri is of Goddess Kaalratri. As per legends she sacrificed her skin color and embraced a dark complexion to kill demons. She is a four-armed deity who rides a donkey, carries a sword, a trident, and a noose. She has a third eye on her forehead that is believed to contain the entire universe.
What to offer: Offer Jaggery as prasad to Devi Kaalratri for relief from pains, obstacles and bring happiness. 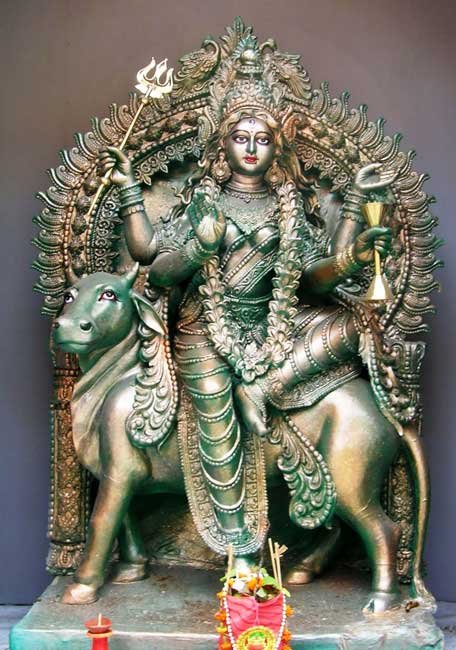 image source Wikipedia
Durga Ashtami or the eight-day of Navratri is dedicated to Goddess Mahagauri. She is a four-armed deity who rides on a bull or a white elephant. She carries a Trishul and a damru in her hands.
What to offer: Goddess Mahagauri is offered coconut by devotees.

image source Wikipedia
The ninth or the final day of Navratri is of Goddess Siddhidhatri. She is projected as a four-armed deity sitting on a lotus, holding a mace, discus, and a book and lotus in her hands. This form of Goddess Durga signifies perfection.
What to offer: Sesame Seeds are offered to Devi Siddhidatri for safety and security from unnatural events.