Noted Santoor player Pandit Shiv Kumar Sharma has passed away. There is an atmosphere of mourning in the music world today, why there is no other santoor player like Pandit ji. This is the reason why he was also called Sultan of strings. 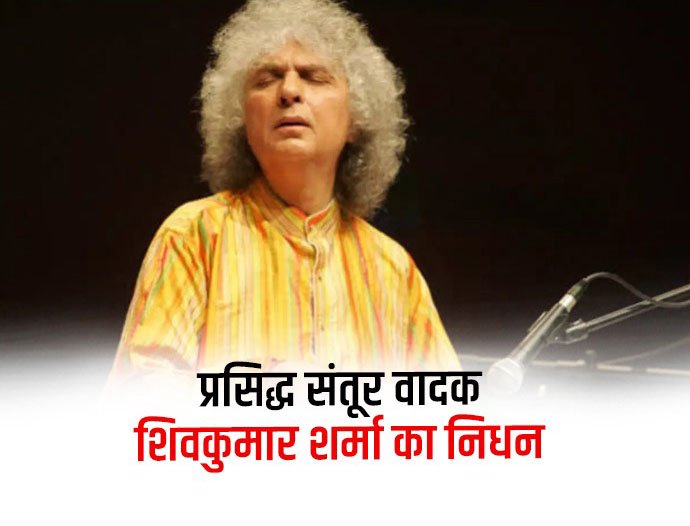 Famous Indian musician and santoor player Pandit Shiv Kumar Sharma has passed away. Indian music got international recognition due to his special style. Pandit ji, during the lock down and covid period for the last two and a half years, Pandit ji came out of the house very little. He had kidney-related problems for the last six months. However, due to age-related problems and kidney problems, he also had to undergo dialysis. He died of a heart attack. His last rites will be performed on the evening of 10 May.

Pandit Shiv Kumar Sharma had an important contribution in the film world too. In Bollywood, the pair of 'Shiv-Hari' (Shiv Kumar Sharma and Hari Prasad Chaurasia) gave music to many hit songs. The music for the song 'Mere Haathon Mein Nau Nau Chudiyan' which was picturized on Sridevi was composed by this hit pair.

Our cultural world is poorer with the demise of Pandit Shivkumar Sharma Ji. He popularised the Santoor at a global level. His music will continue to enthral the coming generations. I fondly remember my interactions with him. Condolences to his family and admirers. Om Shanti.

Chief Minister Yogi Adityanath has expressed deep grief over the demise of eminent santoor player Pandit Shivkumar Sharma. In his condolence message, the Chief Minister has said that Pandit Shivkumar ji, a master of musical art, who was simple in nature and mesmerizing the soul, was an exclusive seeker of Maa Saraswati. He was honored with Padma Vibhushan by the Government of India for his distinguished contribution in the field of art and music. Today, with his death, a vast void has arisen in the music world. Expressing condolences to the bereaved family and disciples, the Chief Minister has prayed to God for the peace of the soul of Shivkumar ji.

The concert was to be held on May 15

Producer and actress Durga Jasraj expressed grief over the loss and said that the music of nature has become silent. After Bapuji Pandit Jasraj ji, now the sudden departure of Shiv Chachaji is a double and everything shattering moment for me. Litterateur Ghazalkar Alok Srivastava said on this sad occasion – Santoor Emperor Pandit Shiv Kumar Sharma is no more. A melodious star of our great Indian classical music tradition has been broken. Humble prayer to Devadhidev Mahadev for the peace of his soul.

Pandit Shiv Kumar Sharma was born in Jammu. He started learning Santoor at the age of 13. His first performance was in the year 1955 in Mumbai. This great personality has said goodbye to the world forever at the age of 84. Everyone is sad because of his passing.