Patiala clashes: Government shut down Internet, after clashes between Sikh and Shivsena

Stones were hurled as two groups clashed during a rally organised by the Shivsena (Bal Thackeray) in Patiala, Punjab, on Friday. Several videos shot at the time of the incident show people raising slogans, pelting stones and brandishing swords even as police tried to control the mob. 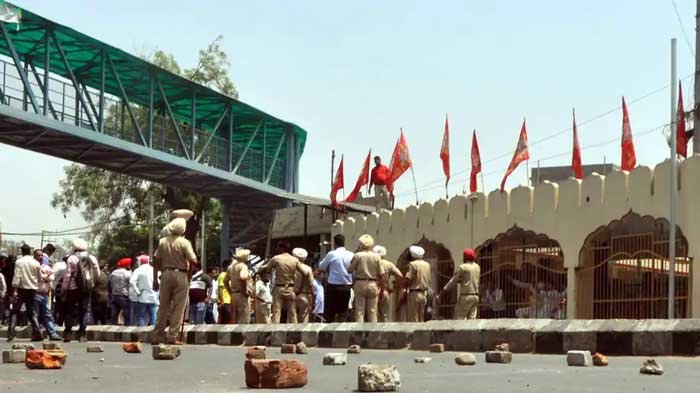 A curfew has been imposed in Punjab's Patiala after two groups Shiv Sena members and Sikh activists during an anti-Khalistan rally. Which was taken out by local Shiv Sena leaders on Friday. Stones were hurled and swords were brandished at the clashes that took place near Kali Mata temple in Patiala. After that government also ordered that mobile internet services and SMS services in the city remain suspended on Saturday, to prevent rumor-mongering.

Members of some Sikh organizations and that of the Shivsena (Bal Thackeray) clashed with each other during the rally as several people from the crowd raised slogans. Shivsena (Bal Thackeray) workers shouted slogans of "Khalistan Murdabad". Following this, some members of Sikh organizations took to the streets, wielding swords. The situation turned tense as both groups started pelting stones. Following the incident, Chief Minister Bhagwant Mann called for a law and order meeting with top officials. A curfew has also been imposed in Patiala from 7 pm Friday to 6 am Saturday.

'Maintain Peace and Brotherhood'
Patiala Deputy Commissioner Sakshi Sawhney called for peace and urged people "to not fall prey to unsubstantiated news". "The District Administration appeals to all brothers and sisters of Patiala and Punjab to continue to maintain peace and brotherhood," Sakshi Sawhney said.

The incident of clashes in Patiala are deeply unfortunate. I spoke with the DGP, peace has been restored in the area. We are closely monitoring the situation and will not let anyone create disturbance in the State. Punjab’s peace and harmony is of utmost importance.

Situation Under Control
Reacting to the incident, Punjab Chief Minister Bhagwant Mann said he spoke with the Director-General of Police (DGP) and peace had been restored in the area.
"The incident of clashes in Patiala is deeply unfortunate. I spoke with the DGP, peace has been restored in the area. We are closely monitoring the situation and will not let anyone create disturbance in the State. Punjab’s peace and harmony are of utmost importance," Bhagwant Mann said.

#WATCH | Punjab: A clash broke out between two groups near Kali Devi Mandir in Patiala today.

Police personnel deployed at the spot to maintain law and order situation. pic.twitter.com/yZv2vfAiT6