Driving home late one night, two brothers, Jaggi and Daljeet run over an old man. They put the body back in his house, but when people suspect, the brothers' lives fall apart. They realize they can trust no one. Not even each other. 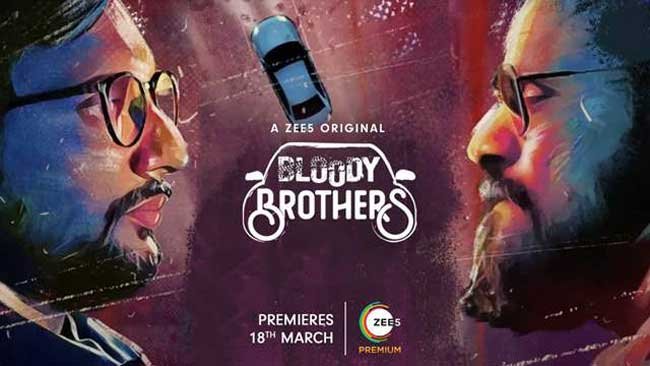 At least with the Luther-inspired Rudra, which was just as dedicated a scene-by-scene remake, Rajesh Mapuskar’s direction had enough personality and verve to make the series its own beast. But Bloody Brothers is spectacularly second-rate and is only salvaged by its excellent lead actors, Jaideep Ahlawat   (as Jagjeet) and  Mohammed Zeeshan Ayyub (as Daljeet).

Hotshot lawyer Jagjeet and his bookstore-running brother Daljeet hit the elderly Samuel Alvarez (Asrani) with their car just outside his house while returning from a wedding reception. Samuel is instantly dead. Jagjeet and Daljeet cover up the crime; they quietly drag Samuel back to his room and on discovering that he was ailing from cancer, the brothers are confident that the police will conclude that Samuel died a natural death.

So far, so good. Things get messy when Samuel’s Mumbai-based niece Sophie (Tina Desai) pops up in the town. Jagjeet encourages Daljeet to flirt with and keep Sophie’s attention away from the discrepancies in her uncle’s death. But it turns out that there was a witness to the brothers’ crime: the canny neighbor Sheila (Maya Alagh). Elsewhere, Jagjeet’s wife Priya (Shruti Seth), who feels ignored, starts a relationship with her fitness trainer Tanya (Mugdha Godse).

Soon, Jagjeet has to fake-hire his perpetually drunk associate Dushyant (Jitendra Joshi) as a private investigator who will help allay Sophie’s doubts. But Dushyant has reasons of his own to do his job diligently, adding more headaches to Daljeet’s list of growing problems. As Sheila makes matters worse for Daljeet, he desperately needs money, which brings campy gangster Handa (Satish Kaushik) to the mix.

As you can understand, the plot has really become convoluted by now and would seem overcooked in the hands of an inept director, which is exactly what happens with Bloody Brothers. The grating score by Roy doesn’t help.