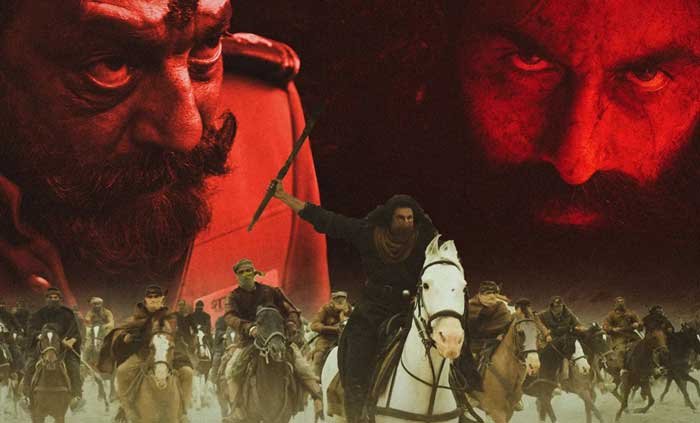 Ahead of the Shamshera trailer's release on June 24, Sanjay Dutt shared a poster of his character from the film. Introducing himself as Daroga Shuddh Singh, the 62-year-old actor dropped the poster on Instagram in which he is seen wearing a police uniform, holding a whip with a huge tikka smeared on his forehead. In the caption, he wrote, "Watch him in #ShamsheraTrailer tomorrow! Celebrate #Shamshera with #YRF50 only at a theatre near you." The actor shared three posters in Hindi, Tamil, and Telugu.

The teaser for Shamshera, the first film collaboration of Sanjay Dutt and Ranbir Kapoor, was released on Wednesday. The Kalank actor wrote on Instagram, "A tribe that needs saving, a world that needs SHAMSHERA. #ShamsheraTrailer out on 24th June." In the teaser, Sanjay Dutt battles Ranbir Kapoor, who plays a dacoit in the film.

Shamshera has been directed by Karan Malhotra and also stars Vaani Kapoor. The film has experienced many delays in the past and will finally hit the screens on July 22, which also happens to be the 50th year of Yash Raj Films, the production house backing the project. The official post of the production house also shared the poster. The caption read, "Evil never looked this good - Durga Shuddh Singh. Meanwhile, Sanjay Dutt was recently seen in Akshay Kumar's Samrat Prithviraj. He also played the antagonist Adheera in Yash's KGF: Chapter 2.