A security guard may provide security for events and during the transportation of people and assets. They may or may not carry weapons for protection and may install surveillance devices, alarms and controlled access equipment on the premises to enhance overall safety and security. 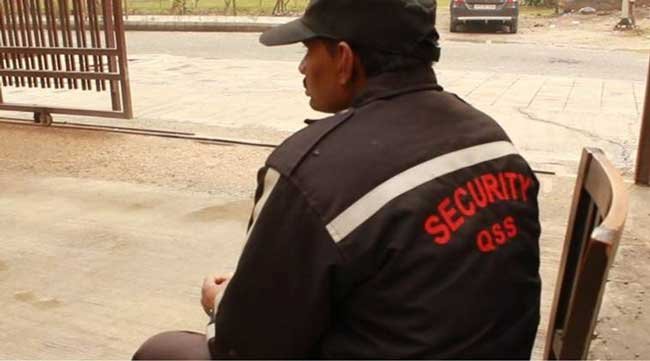 It all started in May 2014, when we were looking for a new Chowkidar for our Society. We had seen a lot of applications and the one that the majority of us liked was that of a man who promised to work day and night for us. Whose experience included a rich fifteen years stint with GujaraTea Co-Op Housing Society. Despite some complaints and of course, records stating a major misdemeanor in 2002 from him, we decided to give him the benefit of doubt. And thus, majority members of the society took a call to hire him as the chowkidar for our area & signed a contract for 5 years.

For the initial few months, it was all hunky and dory. His efforts to create a clean and green society were appreciated by all. He undertook a major re-arrangement of personnel under him and it seemed that this would all lead to great things for our society in general. But then he suddenly started complaining about a school nearby. It was called XNU. He started calling them names and even accused them of undertaking anti-society acts. This felt strange to a few of us, given some of our own kids were from that school too. In fact, not only kids, some of the society members had also studied there.

Here again, the majority decided to give him the benefit of doubt, school was vilified.

To ease communications, he also started WhatsApp forwards to inform members about all the good work he was undertaking and of course anti-society acts of XNU School. It was November 2016, we were still reeling under the anti-society school incident when suddenly he created another rule. No cars or bikes will be allowed inside the society anymore. Only bicycle & pedestrians. People have to walk a lot and it was a daily struggle. But what to do, the contract was democratic & airtight with majority support.

He said this move will clean our society of all black smoke, traffic situations, and unruly miscreants in the area & nearby.

We lost a few old people to exhaustion and a lot of chaos inside society. The anger against chowkidar was increasing but again, the benefit of the doubt was handed to him by the majority. His son also now got buoyed into becoming chowkidar at the Uttar building. In his first few weeks, he got a Gaushala opened inside the society. And involved a lot of selfies with cows.

The chowkidar now stopped spending time inside society. He would spend more time meeting chowkidars of other societies. When people complained to him about mismanagement, he would fold his hands and walk away. He hired a few people below him who would interact with us in all the society meetings and answer all the questions.

There was zero communication between us and the chowkidar now.

But somehow it was always the fault of XNU school.

Then suddenly it came to light that chowkidar had allegedly siphoned a lot of money from one of the society purchases. He had given the contract to his friends and in due process made a lot of money for himself and the people close to him. The majority of support slipped away from him. But he still refused to speak to us. His minions would now scream and shout at anyone who spoke against him. They would even threaten with eviction for those who dissented.

Even members of society began fighting against each other.

It was a hell of a time to be living inside there. Now in two months, the contract is getting over. We are looking at applications again. They say there is no other alternative to the chowkidar and yet the benefit of doubt argument has become feeble this time round. What will happen, only time can tell. One way or another, chowkidar’s golden support time is up.
These events are fictional & have no co-relation to any situation anywhere in India.