Bhuvan Avnindra Shankar Bam is an Indian comedian, writer, singer, songwriter, and YouTube personality from Delhi, India. He is known for his comedy channel on YouTube named BB Ki Vines. 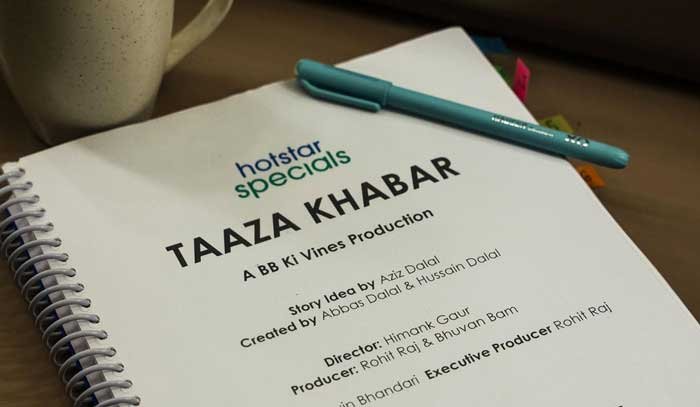 One of the most popular YouTubers of India Bhuvan Bam, famously known for his YouTube channel BB Ki Vines, rules the millions of hearts with his funny videos and never fails to impress his audience. After the massive success of Bhuvan's web series Dhindhora, the YouTuber is back with another show 'Taaza Khabar'. Bhuvan has shared the news of his upcoming web series on social media and has also posted a video regarding the same.

Sharing the teaser, Bhuvan wrote, "With good karma on one’s side, can one man set out to become a master of his destiny? Meet Vasya from my OTT debut #HotstarSpecials #TaazaKhabar only on @disneyplushotstar. Meet the cast & hop on to this miraculous journey along with Shriya Pilgaonkar, Prathmesh Parab, Deven Bhojani sir & me. Can’t wait to bring this to you soon."

The series will stream on Disney+Hotstar and the star cast has started filming for the show. Apart from Bhuvan Bam, the web series also stars Shriya Pilgaonkar, Prathmesh Parab, and Deven Bhojani and it is directed by Himank Gaur.

Bhuvan Bam is one of the most loved YouTubers in India, and his comedy channel 'BB ki Vines' has over 25 million subscribers. He is also a singer, songwriter,r and writer. He plays multiple characters in his videos like Banchoddas, Sameer Fuddi, Titu Mama, Bablu, Janki, Mrs. Verma, Adrak Baba, M.r Hola, Papa Maakichu, and Detective Mango.

Bhuvan's web series Dhindhora is streaming on YouTube for free, and it became a massive hit. In the shows as well, Bhuvan played multiple characters. The show revolves around Bhuvan's father Babloo, who wins a lottery ticket. But things get out of hand when Janaki tells everyone about the lottery and Babloo loses his memories.

How to Set a Daily Step Goal