Burning the midnight oil is a given for students. Depending on one’s chosen career, some exams prove more difficult than others. The higher one's career goal, the tougher the learning curve. 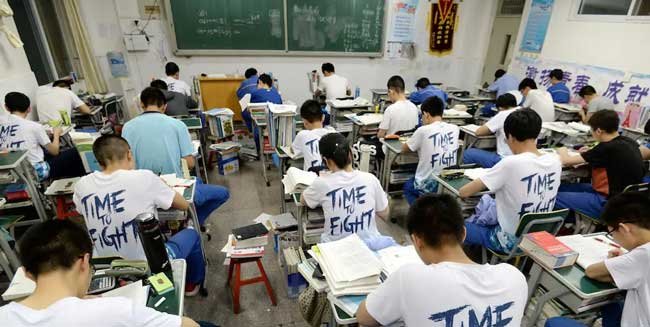 image source business insider
Gaokao is a college entrance exam in China and is infamous as one of the top 10 toughest exams in the world. Due to its difficulty level, some European and American universities have also started to accept Gaokao scores. In the Gaokao exam 2013, candidates were asked to write an essay on how Edison would have reacted to the invention of mobile phones if he teleported himself to the 21st century.

2) IIT-JEE
Is IIT the toughest exam in the world? As the entrance test for Engineering courses at the Indian Institute of Technology (IIT), the JEE is an exam that most certainly breathes the meaning of the word ‘tough’. For JEE, around 10 lakh applicants registered in 2019 and only 13376 seats were available at the IITs. Acceptance rates hover around a meager 1%. Adding to all this, the gigantic syllabus and outright unpredictability of the questions in JEE give you the perfect recipe for one of the toughest exams in India as well as the world. Candidates acing the exam can also get a hold of the Siemens Scholarship that can fund their bachelor’s degree in Engineering.

image source zee news
The Indian Government conducts the UPSC examination to fill the posts across varied departments such as the Indian Administrative Service, Indian Foreign Service, Indian Revenue Service, etc. It consists of three impassable levels. The first level is called Prelims which comprises two general-topic objective papers. Qualified candidates appear for the latter extraordinarily hard level of Mains examination which has a total of seven subjective papers. Those who have successfully cleared the second level then move further to an interview round with a panel that tests personality, awareness, and logic.

4) Mensa
Amongst the world’s oldest societies, Mensa is a high intelligence IQ society whose members have a higher IQ than the 98th percentile, i.e. amongst the top 2% of the world. Mensa has a renowned presence in almost every country across the globe. The IQ test administered by society is an extremely demanding test that analyses one’s intelligence on parameters of reasoning, problem-solving, and logic.

image source aiuto consulting
Majorly conducted to check the proficiency of candidates applying to study abroad, the GRE exam holds a lot of importance in the lives of those aspiring to pursue an international degree. It is mainly conducted for master’s level and Ph.D. programs at institutions abroad. As the exam is widely accepted across various US universities, thousands of students prepare and sit for this particular test making it a tough nut to crack.

6) CFA (Chartered Financial Analyst)
Chartered Financial Analyst (CFA) is said to be the world’s most difficult and brutal exam in the field of Finance. Every year, a whopping 1,00,000 candidates attempt to crack CFA in over 100 countries. Consisting of three levels, it is designed to test Finance professionals about the necessary financial tools and techniques. Each level involves a complicated six-hour exam consisting of 240 questions. After clearing all three levels, a candidate also needs to gain 48 months of professional experience in order to earn the CFA charter by clearing CFA Level 1, CFA Level 2, and CFA Level 3.

image source i-medita
Cisco Certified Internetworking Expert is one of the top 10 toughest exams in the world offered by Cisco Systems to hire networking experts. The exam is bifurcated into 6 parts and is conducted in two phases. Applicants clearing the first phase get to appear for the second one. The second stage exam is 8 hours long in duration and hardly 1% of the total number of candidates are able to clear it. CCIE certification is considered the most prestigious certificate in the entire networking industry, but qualifying for this exam is not an easy task.

8) Master Sommelier Diploma Exam
Climbing at the zenith of the toughest exams in the world, the Court of Master Sommeliers (CMS) conducts the Master Sommelier Diploma Exam to encourage improved standards of beverage service by sommeliers, particularly in wine and food pairing. There are 3 components that are put to test, i.e. theory, service, and blind tasting. Wherein a normal candidate would be able to clear this particular exam in the 5th or 6th attempt, an expert would at least take 3 attempts to clear this wine tasting exam. In the last step, applicants have to ensure that they know the exact year, date, and region where the wine was made. This makes it the most challenging wine examination in the world.