Who is Barbarik, why lakhs of people come to see Khatu Shyam ji

Barbarik: Who is Khatu Shyam, on whose birthday lakhs of people come, know the complete mythological story behind it.... 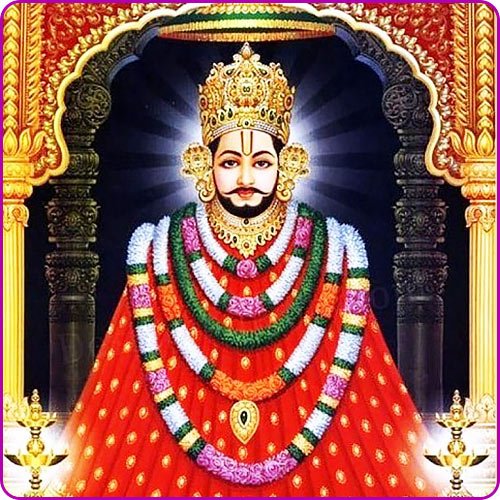 Khatu Shyam is known as the Kalyugi avatar of Lord Shri Krishna. There is a legend behind this saying. His grand temple is located in Sikar district of Rajasthan, where a large number of devotees visit every year. People believe that Baba Shyam fulfills everyone's wishes and can make him a king who does not have anything.

Baba Khatu Shyam is believed to be related to the Mahabharata period. He was the grandson of Pandu Putra Bhima. There is a story that being impressed by the immense power and ability of Khatu Shyam, Shri Krishna granted him a boon to be worshiped in his name in Kali Yuga.

In the incident of Lakshagriha, the Pandavas, wandering from forest to forest after saving their lives, met a demonic named Hidimba. She wanted to get Bhima as her husband. On the orders of Mother Kunti, Bhima and Hidimba were married, from which Ghatotkacha was born. Ghatotkacha's son was Barbarika, who was more powerful and elusive than his father.

Barbarika was a worshiper of the goddess. By the boon of the goddess, he had received three divine arrows, which used to hit their target and return. Because of these, Barbarik was always invincible.

During the war of Mahabharata, Barbarik was coming to Kurukshetra with the intention of seeing the war. Shri Krishna knew that if Barbarika joined the war, the result would be against the Pandavas. To stop Barbarika, Shri Krishna came in front of Barbarika as a poor Brahmin. Being unaware, Shri Krishna asked Barbarik who are you and why are you going to Kurukshetra. In response, Barbarik said that he is a charitable warrior who can decide the Mahabharata war with one of his arrows. When Shri Krishna wanted to take his test, he shot an arrow which pierced all the leaves of the Peepal tree. A leaf was under the feet of Shri Krishna, so the arrow stopped above the feet.

Also Read - Winter Health Tips: Want to be healthy in winter, so take special care of these things

After performing bhajan-worship throughout the night and bathing on Falgun Shukla Dwadashi, Barbarik donated his head to Shri Krishna with his own hand. Before donating the head, Barbarik had expressed his desire to see the war with Shri Krishna, so Shri Krishna  installed the severed head of Barbarik on a high place for war observation. Gave.

After winning the war, the Pandavas were debating to take the credit for the victory. Then Shri Krishna said that it can be decided by the head of Barbarika. The head of Barbarik said that the Sudarshan Chakra of Shri Krishna was going on in the war, due to which the warriors were falling in the battlefield like a cut tree. Draupadi was drinking blood in the form of Mahakali.

-Shri Krishna pleased and blessed that severed head of Barbarika that in Kaliyuga you will be worshiped by the name of my Shyam only by your remembrance will the welfare of the devotees and Dharma, Artha, Kama, Salvation will be achieved.

After seeing the dream, Baba Shyam appeared from Shyam Kund situated in Khatu Dham. Shri Krishna is fulfilling the wishes of the devotees by being situated in the temple of Khatu Shyam ji since 1777 in the form of Virat Shaligram.

Khatushyam fair is held every year

Khatu Shyamji's fair is held every year during Holi. In this fair, devotees from all over the country and abroad come to see Baba Khatu Shyam ji. Devotees have deep faith in this temple. Baba Shyam, Hare Ka Sahara, Lakhdatar, Khatushyam Ji, Morvinandan, Khatu Ka Naresh and Sheesh Ka Dani He is called by his devotees. The attraction of the Khatu Shyam ji fair is also the human service that takes place here. People of the biggest families come here like common man and serve the devotees. It is said that by doing this one attains virtue.

The devotees have so much faith in this temple that they give the credit of their happiness to Khatu Shyam ji. Devotees tell that Baba Khatu Shyam fulfills everyone's wishes. Baba does not keep empty the bags of those who have hope in Khatu Dham.