Protests were held after Friday prayers in Lucknow, Prayagraj, Deoband and Moradabad of Uttar Pradesh over the same issue. In Saharanpur, the agitation had turned tense and police resorted to baton-charge to bring the situation under control. 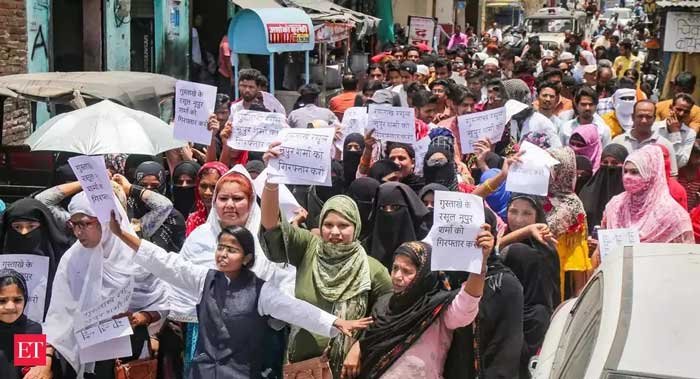 In Delhi, a massive peaceful protest and sloganeering were held at the Jama Masjid demanding the arrest of suspended BJP spokesperson Nupur Sharma. The Shahi Imam of the Jama Masjid said no call for protwas est given by the mosque authorities. The initial protest had lasted for about half an hour, following which the protesters dispersed. They later gathered again.

Protests were also held in Lucknow, Prayagraj, Deoband, and Moradabad in Uttar Pradesh over the same issue. In Saharanpur, locals staged a protest and tried to march towards the Ghantaghar after Friday prayers in the Nawabganj area. Police resorted to baton-charge to disperse the crowd. The situation was tense, but under control at the moment.

Violent clashes had erupted a week ago in Kanpur after two groups protested over controversial speeches made by Sharma at a television debate. The remarks have also led to international condemnation. The BJP has suspended Sharma and expelled its Delhi media head Naveen Jindal over their remarks on the Prophet.

The Delhi Police said legal action would be taken against the protesters as there was no permission for the stir at Jama Masjid. Central District DCP Shweta Chauhan said, “Almost 1,500 people had gathered in Jama Masjid for Friday prayers. After the prayers, nearly 300 people came out and started to protest over inflammatory remarks by Nupur Sharma and Naveen Jindal. Within 10-15 minutes, we managed to bring the situation under control. Protests were done on the street, without any permission so legal action will be taken.”

Protests erupted at several places in Srinagar, including Lal Chowk, Batamaloo, and Tengpora.

Ludhiana’s Shahi Imam said after a protest called by the Ludhiana Jama Masjid, protests were held across Punjab demanding the arrest of the suspended BJP leaders.

The Old city of Hyderabad also witnessed massive protests in several areas, including outside Mecca Masjid, over the issue. Police and CRPF were deployed in the area.

No call for protest given by Masjid, says Shahi Imam of Jama Masjid. pic.twitter.com/Kysiz4SdxH

Eat These Things For Your Healthy Skin