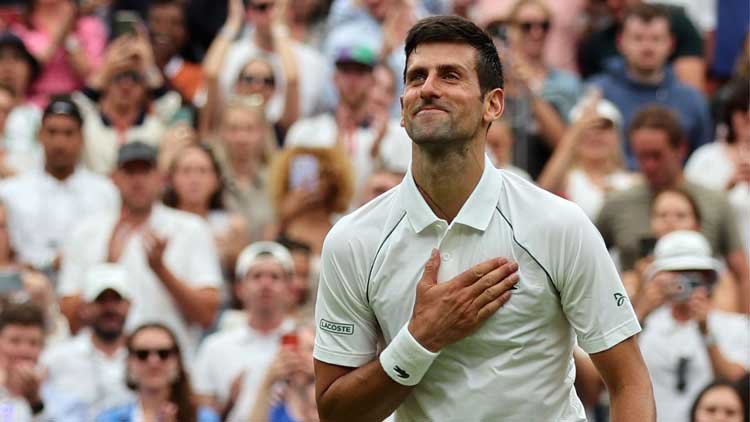 There he was again. Crouching down to the Centre Court surface, plucking a piece of grass, eating it with relish. In a Grand Slam ruled by a great number of unbreakable traditions, this one is synonymous with Novak Djokovic.

On Sunday, he beat Nick Kyrgios 4-6, 6-3, 6-4, 7-6(3) to win his seventh Wimbledon title. That’s level with Pete Sampras and just one short of Roger Federer’s men’s singles record at the All England Club. But there was one thing he did overtake the Swiss maestro in. For most of his career, Djokovic has been a chaser both on and off the court. He’s a defensive baseliner, a tireless runner who will run down almost everything an opponent will throw at him, patiently build a rally, and pull the trigger when least expected from any position on the court. He’s been one of the greatest – if not the best – returners the game has seen.

In its 100 years, Centre Court has seen few champions like @DjokerNole pic.twitter.com/vffvL2f08Q


But when he won his latest Grand Slam, he finally overtook Federer’s tally of 20 Major titles. Now he’s just one short of Rafael Nadal’s all-time men’s record. All his life he has chased the other two members of tennis’ Big Three. For the first time, he’s overtaken one of them.

“Things have changed in the last year, year and a half for me. I achieved that historic No 1, weeks as No 1 that I worked for all my life,” he said in the press conference, referring to overtaking Federer’s previous record of being the world No 1 for 310 weeks – Djokovic has held that position for 373 weeks. “Now that that’s done and dusted, I prioritize Slams and big tournaments really and where I want to play, where I feel good.” And Wimbledon has been that place – this year especially – where he has felt most comfortable. He’s won seven of the eight finals he’s played at the All England Club. He now joins an elite list that includes just Bjorn Borg, Pete Sampras, and Federer as the only men to have won at least four Wimbledon titles on the trot in the Open Era.

This is how champions play

Over to you, @DjokerNole... pic.twitter.com/fn5KXfpxUo


The grass-court Slam provided him that avenue.
Djokovic’s most successful Major has been the Australian Open, which he has won nine times. But it’s Wimbledon that he remembers as the event that made him fall in love with the sport, when he watched the 1993 edition on television, as a six-year-old growing up in Serbia. It’s been that one tournament that has helped him restart and get his career back on track, not just this year.

“Wimbledon historically has always come at such important stages of my life and my career. A few times, I think it was in 2018 when I was starting the year with elbow surgery, trying to work my way back in the rankings, but not playing well. This was the first Slam that I won that served as a springboard for later US Open win and 2019 Australian Open,” he said.