Blinkit was one of the more than 40 unicorns - or startups valued at more than $1 billion, created in India last year. 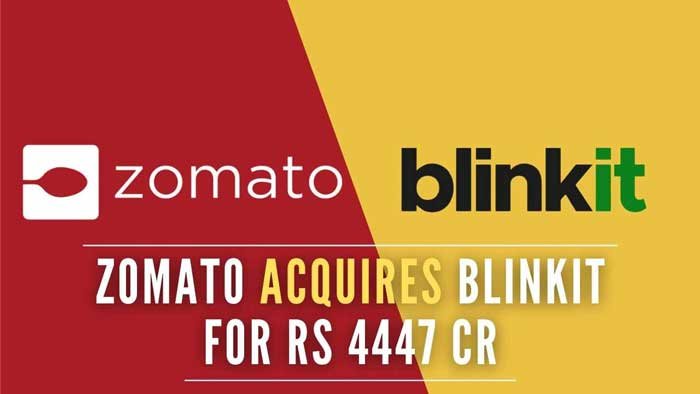 Zomato - backed by Sequoia Capital and Jack Ma’s Ant Group among others - expects the market for quick deliveries to extend exponentially to include categories such as beauty and personal care, electronics, over-the-counter pharmaceuticals, and stationery. It expects that demand for quick deliveries will grow in large Indian cities in the long term.


Here’s what to know about the deal so far
1) The deal is worth ₹4,447 crores (about $570 million), said Bloomberg. This will be paid by Zomato in the form of shares in the parent company. However, it is still not clear whether it will be an ‘all-stock’ deal or not. It is being reported that the shareholders of Blinkit will get a roughly 7 percent stake in Zomato at ₹70.76 per share.

2) Blinkit - known for quick deliveries of groceries and essentials - is owned & managed by ‘Blink Commerce Private Limited’ which was formerly known as Grofers India Private Limited. Grofers essentially rebranded itself as ‘Blinkit’ as its CEO promised to speed up deliveries of everything from groceries to electronics, in a market dominated by e-commerce giants Flipkart and Amazon.

3) Blinkit was one of the more than 40 unicorns - or startups valued at more than $1 billion, created in India last year, a report by Livemint said.

4) Zomato has previously invested in Blinkit in August last year, extending a loan of over $100 million for the quick-commerce entity. Zomato currently owns 9 percent of the stakes in Blinkit and plans to keep the Blinkit app separate from the Zomato app after acquisition.

BUSINESS
5) “The acquisition of Blinkit’s tech platform, the scale of business, third party brands and sellers, and its network of warehouses will help save costs for Zomato,” Chief Executive Officer Deepinder Goyal was quoted as saying by Bloomberg.

Stone-pelting girl scores a goal for women's football team to shed her...