Cars for loyalty: Chennai based it company gifted cars to there loyal employees

Ideas2IT started in 2009 in Silicon Valley as a Chief Technology Officer (CTO) consulting firm. Our founder, Murali Vivekanandan would serve as the CTO for some of his former coworkers. They were ex-Googlers. 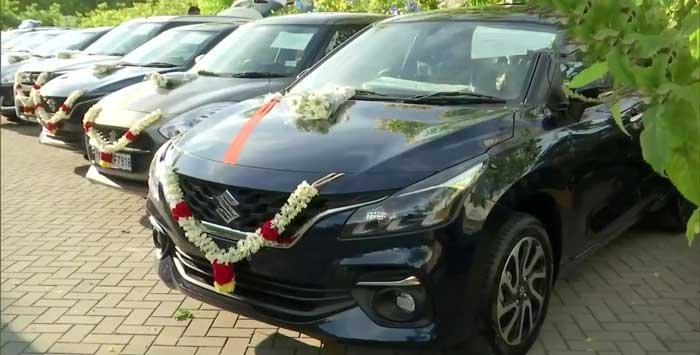 A car is a dream for millions, while some have already realized their dream, some are slowly moving towards their aspirations. For those, who are yet to own a car, a gift in the form of a four-wheeler can mean a great deal. Recently, a Chennai-based IT company gifted 100 cars to its employees to honor their contribution to the organization. The company Ideas2IT gifted 100 Maruti Suzuki cars to its 100 employees. The company said that the gesture was to acknowledge their consistent support and contributions to the IT firm’s growth.

"We are gifting 100 cars to 100 of our employees who have been a part of us for more than 10 years. We have a strength of 500 employees. Our concept is to return the wealth we have received, to the employees," said Hari Subramanian, Marketing Head, Ideas2IT. According to a report, Murali Vivekanandan, the Founder and Chairman of Ideas2IT said that the employees have been putting relentless efforts into building the company and that it was not a gift, rather they earned the cars through their sheer hard work and determination.

"It's always great to receive gifts from the organization; on every occasion, the company shares its happiness with gifts like gold coins, iPhones. Car is a very big thing for us," said an employee pic.twitter.com/iiTF9NHIJ7

Way To Share Wealth
The founder told the new portal that some seven years ago the company had promised that it will share its wealth when it reaches its goals. He added that gifting the cars was merely the first step and that the company plans to roll out more such incentives in the future.

Ideas2IT has been doling out perks such as gold coins and iPhones to its employees. "It is always great to receive gifts from the organization; on every occasion, the company shares its happiness with gifts like gold coins, iPhones. Car is a very big thing for us," said one of the employees who received a car.

A day after Ideas2IT gifted 100 cars, another IT firm in Chennai gifted five BMW 6 Series cars worth Rs 1 crore each to its senior management. The software-as-a-service (SaaS) firm Kissflow Inc made headlines after it gifted the BMWs to its executives. CEO Suresh Sambandam said that the five executives have been with the firm right from the inception of the company and the cars were to honor their loyalty and commitment to the organization. Sambandam said that some of the recipients of the cars were from modest backgrounds and had faced numerous challenges in life to reach where they are today.

The Tradition
Ideas2IT and Kissflow Inc have boosted the morale of their employees with their benevolent acts of kindness. However, the tradition of handing out expensive gifts is not new.

In 2018, a billionaire diamond merchant Savji Dholakia from Gujarat’s Surat distributed 600 cars to his staff at Hare Krishna Exports. In an official ceremony, the Prime Minister gifted the keys to the brand new cars to four of the company’s employees. Dholakia had organised a grand event to gift Renault KWID and Maruti Suzuki Celerio cars. The company also gave fixed deposits to nearly 1700 of its employees as a part of the loyalty program. In 2016, Dholakia was again in the news after 400 flats and 1,260 cars as Diwali bonuses to his employees. His diamond firm Hare Krishna Exports spent Rs 51 crores on Diwali bonuses to mark its golden jubilee. As many as 1,716 employees were acknowledged as the company's best performers.

India is one of the biggest automobile markets in the world. Despite the pandemic and other constraints related to manufacturing, car sales registered a hike of 27 percent in 2021 selling over 30 lakh units. This shows how families are putting their money into owning their dream cars.