Nine different forms of Maa Durga are worshiped twice a year, the first is Chaitra Navratri and the second is Shardiya Navratri, one day before Vijayadashami, the Shardiya Navratri ends. . In both the Navratras, Goddess Durga's Shailputri, Brahmacharini, Chandraghanta, Kushmanda, Skandmata, Katyayani, Kalratri, Mahagauri, Siddhidatri (Siddhidatri) Forms are worshiped and worshipped. So let's know about the nine forms of Maa Durga and her mantras..... 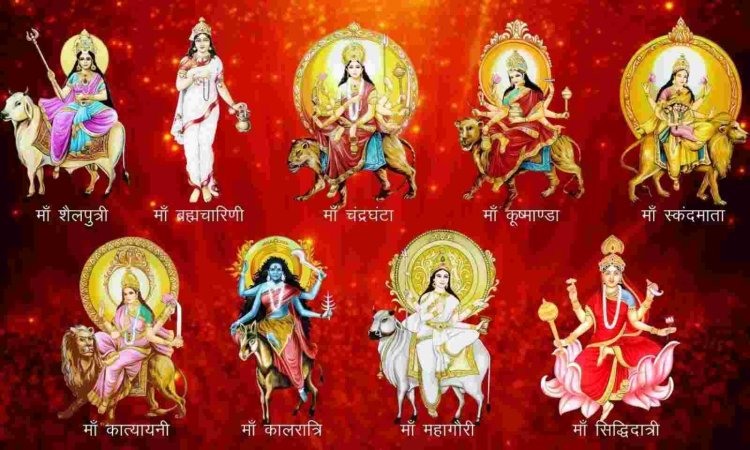 Shailputri, the first form of Maa Durga
Shail means Himalaya and because of her birth in Himalaya she is called Shailputri. As Parvati, she is also known as the consort of Lord Shankar. Vrishabha (bull) being his vehicle, he is also known as Vrishabharudha. He holds a trident in his right hand and a lotus in his left hand.

Another form of Maa Durga is 'Brahmacharini'
On the second day of Navratri, there is a law to worship the 'Goddess Brahmacharini' form of Maa Durga. Maa Brahmacharini holds a garland in her right hand and a kamandal in her left hand. It is told in the scriptures that Maa Durga was born as Parvati as the daughter of Parvataraj and at the behest of Maharishi Narada, she had done severe penance in her life to get Lord Mahadev as her husband. She was named Tapascharini or Brahmacharini because of thousands of years of rigorous penance. During this period of his penance, he pleased Mahadev by fasting for many years and doing very hard penance. This form is worshiped and praised in the second Navratri.

Maa 'Chandraghanta' is the third form of Maa Durga.
Worship of Chandraghanta Devi, the third form of Durga, on the third day of Navratri, these goddesses have half an hour-sized moon on their heads, hence their name Chandraghanta. This goddess is believed to have ten hands and is equipped with weapons. It is believed that by worshiping this form of Goddess one attains supernatural peace of mind and this leads to attainment of ultimate well-being not only in this world but also.

Kushmanda, the fourth form of Maa Durga
Maa Kushmanda, the fourth form of Durga is worshiped on the fourth day of Navratri. It is believed that before the creation of the universe, when there was darkness all around, then Maa Durga created this universe. That's why she is called Kushmanda. Due to the origin of the universe, he is also named Adishakti. He has eight arms and rides on a lion. The seven hands hold a wheel, a mace, a bow, a kamandal, a vase, an arrow and a lotus.

Maa Skandmata is the fifth form of Maa Durga.
Skandmata, the fifth form of Maa Durga, is worshiped on the fifth day of Navratri. Skanda is a name for Kartikeya, the second and Shadanan (six-faced) son of Shiva and Parvati. Being the mother of Skanda, she was named Skandamata. This form of mother has four arms and she holds Skanda i.e. Kartikeya with the upper arm on the right side and the lower arm on this side holds a lotus flower. The upper arm on the left side holds the Varada mudra and the white lotus flower under the other arm. The lion is his vehicle. Since she is the presiding deity of the solar system, a supernatural glowing circle around her appears like the sun.

Maa Katyayani, the sixth form of Maa Durga
Katyayani, the sixth form of Maa Durga, is worshiped on the sixth day of Navratri. It is believed that one who worships them attains the four Purushartha Chaturdashi of Dharma, Artha, Kama and Moksha. Because she was born as the daughter of Maharishi Katyayan of Katya gotra, hence she was named Katyayani. His complexion is as bright as gold and he has four arms. The upper right hand is in abhaya mudra and the lower hand is in var mudra. In the upper left hand is a sword, and in the lower hand is a lotus flower. His vehicle is also a lion.

Maa Kalratri is the seventh form of Maa Durga.
On the seventh day of Navratri, there is a law to worship Maa Kalratri, the seventh form of Durga. Its color is as black as darkness. The hair is scattered and the garland visible around his neck is as bright as lightning. He is said to be the destroyer of all demonic powers. He has three eyes and four hands, one holding a sword, the other holding an iron weapon, the third hand holding Abhayamudra and the fourth hand holding Vara Mudra. His vehicle is Gardabh i.e. donkey.

Maa Mahagauri, the eighth form of Maa Durga
On the eighth day of Navratri, there is a law to worship Maa Mahagauri, the eighth form of Maa Durga. As their name suggests, their color is completely white. Their clothes are also of white color and all the ornaments are also white. His vehicle is Vrishabha i.e. bull and he has four hands. His upper right hand is in Abhaya Mudra and his lower right hand holds a trident. The upper left hand is holding a Damru and the lower hand is in Varmudra. It is said that in order to get Lord Shiva in the form of a husband, he had done severe penance for thousands of years, due to which his complexion turned black, but later Lord Mahadev regained his color from the Ganges water. ,

Maa Siddhidatri is the ninth form of Maa Durga.
On the ninth day of Navratri, there is a law to worship Maa Siddhidatri, the ninth form of Maa Durga. Goddess Siddhidatri is the goddess who bestows all kinds of siddhis. He has four hands and is seated on a lotus flower. By the way, their vehicle is also a lion. He holds a chakra in his lower right hand and a mace in his upper hand. In the lower left hand is a lotus flower and in the upper hand is a conch. Eight siddhis namely Anima, Mahima, Garima, Laghima, Prapti, Prakamya, Ishitva and Vashitva are mentioned in ancient scriptures. These eight siddhis can be attained by the worship and grace of Maa Siddhidatri. Hanuman Chalisa has also been called 'the donor of Ashta Sidhi Nav Nidhi'.