Subhas Chandra Bose (also called Netaji) is known for his role in India's independence movement. A participant of the non-cooperation movement and a leader of the Indian National Congress, he was part of the more militant wing and known for his advocacy of socialist policies. 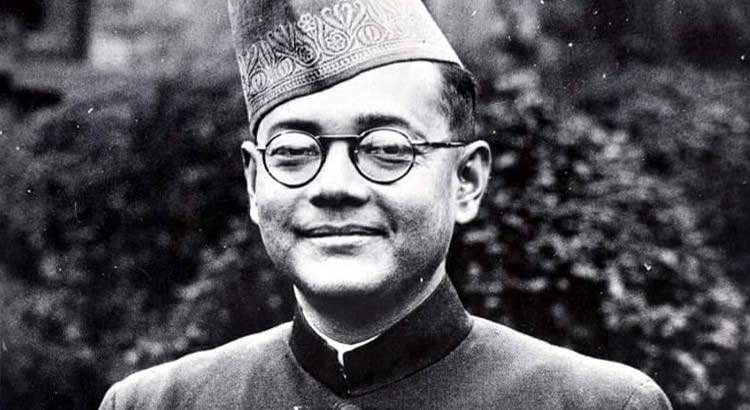 Subhas Chandra Bose, byname Netaji, Indian revolutionary prominent in the independence movement against British rule of India. He also led an Indian national force from abroad against the Western powers during World War II. He was a contemporary of Mohandas K. Gandhi, at times an ally and at other times an adversary. Bose was known in particular for his militant approach to independence and his push for socialist policies.

“It is our duty to pay for our liberty with our own blood.”

Netaji's Biography
Subhas Chandra Bose was born to Prabhavati Bose and Janakinath Bose on 23 January 1897 in Cuttack—in what is today the state of Odisha in India but was then the Orissa Division of Bengal Province in British India. Prabhavati, or familiarly Mā jananī, the anchor of family life, had her first child at age 14 and 13 children thereafter. Subhas was the ninth child and the sixth son. Jankinath, a successful lawyer and government pleader, was loyal to the government of British India and scrupulous about matters of language and the law. A self-made man from the rural outskirts of Calcutta, he had remained in touch with his roots, returning annually to his village during the pooja holidays.

"Life loses half its interest if there is no struggle
if there are no risks to be taken."

Eager to join his five school-going older brothers, Subhas entered the Baptist Mission's Protestant European School in Cuttack in January 1902. English was the medium of all instruction in the school, the majority of the students being European or Anglo-Indians of mixed British and Indian ancestry. The curriculum included English—correctly written and spoken—Latin, the Bible, good manners, British geography, and British History; no Indian languages were taught. The choice of the school was Janakinath's, who wanted his sons to speak flawless English with flawless intonation, believing both to be important for access to the British in India. The school contrasted with Subhas's home, where only Bengali was spoken. At home, his mother worshipped the Hindu goddesses Durga and Kali, told stories from the epics Mahabharata and Ramayana, and sang Bengali religious songs.

“It is blood alone that can pay the price of freedom.
Give me blood and I will give you freedom”

In 1909 the 12-year-old Subhas Bose followed his five brothers to the Ravenshaw Collegiate School in Cuttack. Here, Bengali and Sanskrit were also taught, as were ideas from Hindu scriptures such as the Vedas and the Upanishads not usually picked up at home. Although his western education continued apace, he began to wear Indian clothes and engage in religious speculation. To his mother, he wrote long letters which displayed acquaintance with the ideas of the Bengali mystic Ramakrishna Paramahamsa and his disciple Swami Vivekananda, and the novel Ananda Math by Bankim Chandra Chatterjee, popular then among young Hindu men. Despite the preoccupation, Subhas was able to demonstrate an ability when needed to focus on his studies, compete, and succeed in exams. In 1912, he secured the second position in the matriculation examination conducted under the auspices of the University of Calcutta. 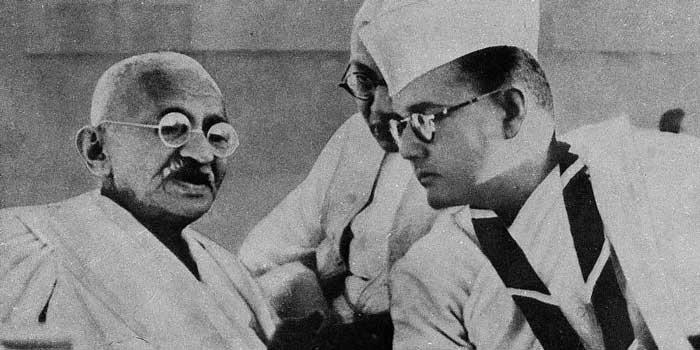 image source wiki
Subhas Bose, aged 24, arrived ashore in India at Bombay on the morning of 16 July 1921 and immediately set about arranging an interview with Mahatma Gandhi. Gandhi, aged 51, was the leader of the non-cooperation movement that had taken India by storm the previous year and in a quarter-century would evolve to secure its independence.[ax][ay] Gandhi happened to be in Bombay and agreed to see Bose that afternoon. In Bose's account of the meeting, written many years later, he pilloried Gandhi with question after question.[91] Bose thought Gandhi's answers were vague, his goals unclear, and his plan for achieving them was not thought through.[91] Gandhi and Bose differed in this first meeting on the question of means- for Gandhi non-violent means to any end were non-negotiable; in Bose's thought, all means were acceptable in the service of anti-colonial ends.
“Freedom is not given, It. Is taken”
1941: Escape to Nazi Germany
Bose's arrest and subsequent release set the scene for his escape to Nazi Germany, via Afghanistan and the Soviet Union. A few days before his escape, he sought solitude and, on this pretext, avoided meeting British guards and grew a beard. Late-night 16 January 1941, the night of his escape, he dressed as a Pathan to avoid being identified. Bose escaped under British surveillance from his Elgin Road house in Calcutta on the night of 17 January 1941, accompanied by his nephew Sisir Kumar Bose, later reaching Gomoh Railway Station in the then state of Bihar, India. 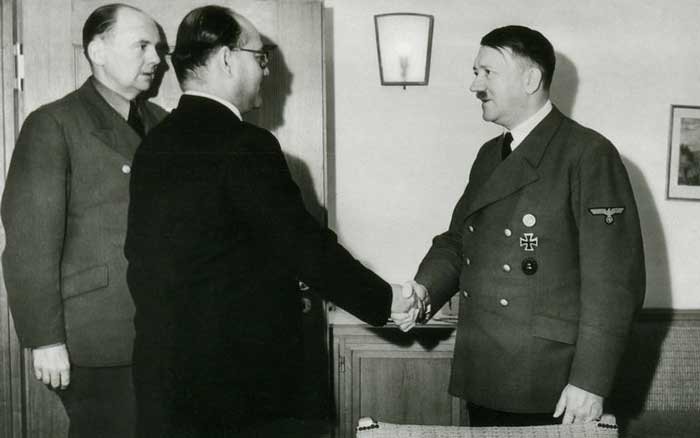 image source wiki
In Germany, he was attached to the Special Bureau for India under Adam von Trott zu Solz who was responsible for broadcasting on the German-sponsored Azad Hind Radio He founded the Free India Center in Berlin and created the Indian Legion (consisting of some 4500 soldiers) out of Indian prisoners of war who had previously fought for the British in North Africa before their capture by Axis forces. The Indian Legion was attached to the Wehrmacht and later transferred to the Waffen SS. Its members swore the following allegiance to Hitler and Bose: "I swear by God this holy oath that I will obey the leader of the German race and state, Adolf Hitler, as the commander of the German armed forces in the fight for India, whose leader is Subhas Chandra Bose". This oath abrogated control of the Indian legion to the German armed forces whilst stating Bose's overall leadership of India. He was also, however, prepared to envisage an invasion of India via the USSR by Nazi troops, spearheaded by the Azad Hind Legion; many have questioned his judgment here, as it seems unlikely that the Germans could have been easily persuaded to leave after such an invasion, which might also have resulted in an Axis victory in the War.
“Never lose your faith in the destiny of India.
There is no power on Earth that can keep India in bondage.
India will be free, that too, soon.”
Ideology
Subhas Chandra Bose believed that the Bhagavad Gita was a great source of inspiration for the struggle against the British. Swami Vivekananda's teachings on universalism, his nationalist thoughts, and his emphasis on social service and reform had all inspired Subhas Chandra Bose from his very young days. The fresh interpretation of India's ancient scriptures had appealed immensely to him. Some scholars think that Hindu spirituality formed an essential part of his political and social thought. As historian Leonard Gordon explains "Inner religious explorations continued to be a part of his adult life. This set him apart from the slowly growing number of atheistic socialists and communists who dotted the Indian landscape."

Memorials
Bose was featured on the stamps in India from 1964, 1993, 1997, 2001, 2016, and 2018. Bose was also featured in ₹2 coins in 1996 and 1997, ₹ 75 coins in 2018, and ₹125 coins in 2021. Netaji Subhas Chandra Bose International Airport at Kolkata, Netaji Subhash Chandra Bose Island, formerly Ross Island, and many other institutions in India are named after him. On 23 August 2007, Japanese Prime Minister, Shinzō Abe visited the Subhas Chandra Bose memorial hall in Kolkata. Abe said to Bose's family "The Japanese are deeply moved by Bose's strong will to have led the Indian independence movement from British rule. Netaji is a much-respected name in Japan."

Eat These Things For Your Healthy Skin