Watch Captain Marvel in a new look from the Ms. Marvel series.

Captain Marvel is a 2019 American superhero film based on Marvel Comics featuring the character Carol Danvers / Captain Marvel. Produced by Marvel Studios and distributed by Walt Disney Studios Motion Pictures, it is the 21st film in the Marvel Cinematic Universe (MCU). 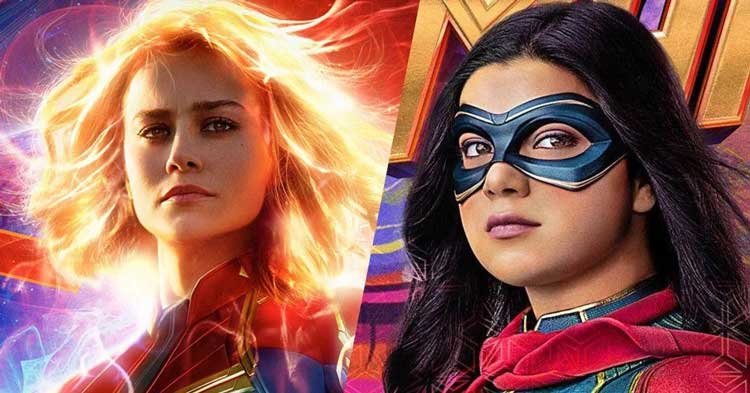 As the Marvel Cinematic Universe moves forward, new and returning characters alike continue to be thrust into the spotlight after the game-changing events of the Infinity Saga. Leading the way in this charge is Brie Larson's Captain Marvel, who not only has her own solo sequel coming next year but also had a major influence on the latest Disney+ release in the MCU as well.

Marvel Studios delivered quite the shocking moment when Episode 6 of Ms. Marvel ended on a major cliffhanger, seemingly having Kamala Khan teleported to another location and switching places with her longtime idol. Brie Larson's Carol Danvers wound up crashing through Kamala's closet door before staring at her surroundings and trying to figure out why these bedroom walls were filled with tributes and pictures of her.

The finale of Marvel Studios' is now streaming on @DisneyPlus. pic.twitter.com/S8Taoe4d0s


This marks Larson's second appearance in Phase 4 of the MCU after Shang-Chi and the Legend of the Ten Rings, setting her up for a wild adventure in next year's The Marvels alongside Iman Vellani's Kamala Khan. And as has been the case for Larson over the last few years, it came with a whole new look for the Cosmic Avenger this time around.

Captain Marvel's New Look:
The mid-credits scene from Episode 6 of Ms. Marvel brought Brie Larson's Carol Danvers back to Earth, complete with her fourth new costume in the Marvel Cinematic Universe. The design of the costume is largely similar to what fans have seen over the heroine's three-year tenure in the MCU so far, particularly with the color scheme.


A couple of new things to point out are her new hairdo, which comes with partial braids on the left side of her head, and shorter sleeves on her top that leave the lower parts of her arms exposed. She also has what appear to be golden gauntlets on her wrists below the classic fingerless blue gloves she's worn in past costumes.

This look is quite different than her first suit from 2019's Captain Marvel, which took its design almost directly from the Marvel Comics pages. That costume featured more intricate markings on the legs along with a red belt, plus it had full red gauntlets going up her forearms and more red on her shoulders.