Screen Actors Guild Awards (also known as SAG Awards) are accolades given by the Screen Actors Guild-American Federation of Television and Radio Artists (SAG-AFTRA). The award was founded in 1952 to recognize outstanding performances in movie and prime-time television. 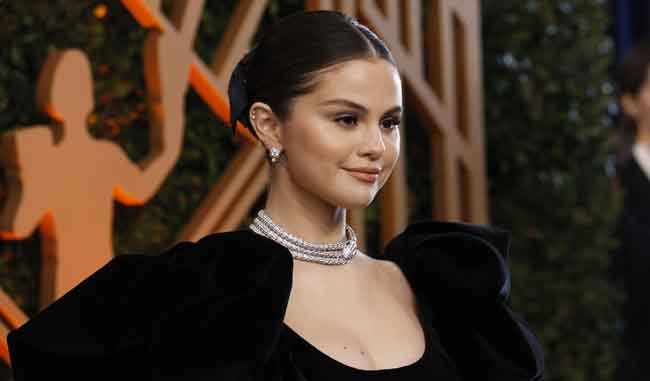 Singer-actor Selena Gomez decided to ditch her heels at the SAG Awards 2022 on Monday. She was seen arriving on stage without her shoes, followed closely by Martin Short. A video has been doing the rounds on the internet in which Selena can be seen tripping in her black high heels. And after falling to her knees, the singer ditched her footwear and sauntered on stage barefoot.

After seeing the clips, fans heaped praises on Selena for going barefoot. "Selena presenting barefoot is the most Selena Gomez thing ever," a social media user wrote. "Is Selena Gomez barefoot? Love it. F**k heels," another one tweeted. The former Disney Channel star, 29, arrived at the awards show wearing a custom black velvet Oscar de la Renta gown. She presented the Best Supporting Actress Award with her Murders in the Building co-star Martin.


Recently, Selena Gomez clarified that there is no heat between her and her ex The Weeknd's new girlfriend Simi Khadra. Days after The Weeknd was spotted kissing Simi Khadra (from DJ sister duo Simi and Haze), Selena shared a fun picture on Instagram of the three pals hanging out.

Since 2013, she captioned the photo of herself, Simi, and Haya Khadra, shutting down social media buzz of possible tension over her ex.
Selena, 29, and The Weeknd (real name Abel Tesfaye) dated from January to October 2017 following his on-again-off-again relationship with supermodel Bella Hadid, who Khadra is believed to be friends with. Following their split, Selena sang her ex's praises, telling Billboard she and The Weeknd were still close despite the breakup.

selena walking barefoot on stage is the most selena gomez thing she could do pic.twitter.com/aTeH916U92

"Something that I'm really proud of is that there's such a true friendship (between me and The Weeknd)," she told the outlet. "I truly have never experienced anything like that in my life. We ended it as best friends, and it was genuinely about encouraging and caring (for each other), and that was pretty remarkable for me."

Lock Upp: Why did Payal Rohatgi has a fight with Siddharth Sharma?